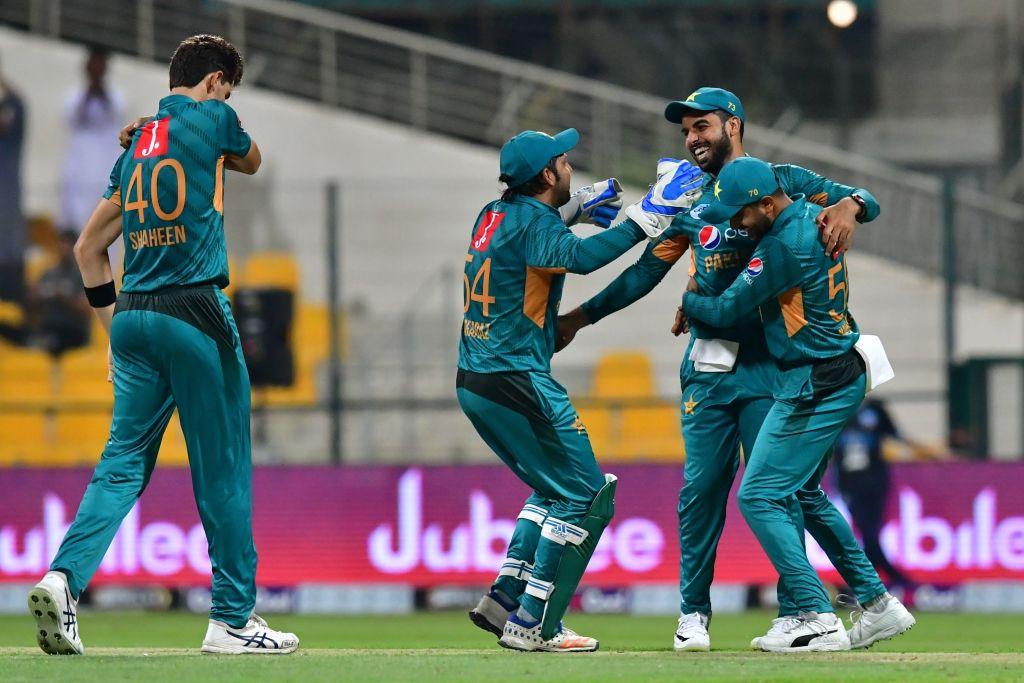 ABU DHABI (Web Desk) – In-form Pakistan rallied to beat New Zealand by two runs in a thrilling Twenty20 International in Abu Dhabi, which launched the three-match series in style. Colin Munro and Ross Taylor's sterling efforts with the bat were in vain as Pakistan narrowly defended their first innings score of 148/6. Mohammad Hafeez starred with a 36-ball 45 and conceded just 13 runs off his three overs in the second innings, while Hasan Ali picked up a three-for, including some vital late-innings scalps. Pakistan were bidding to extend their winning streak in the UAE, having emerged victorious from the previous 11 T20I series. Pakistan captain Sarfraz Ahmed, who has captained his nation to 26 wins in 30 T20Is, won the toss and elected to bat – a tried and trusted formula in the 3-0 series victory against Australia. It was new Black Caps coach Gary Stead’s first national assignment and New Zealand's first slice of international action for seven months. Stead admitted to being “nervous” and who could blame him? Pakistan, the No.1-ranked team in the world according to the MRF ICC T20I Team Rankings, were fresh from outclassing their Australasian rivals. It was a tough first gig. Sahibzada Farhan got an early reprieve when Adam Milne was adjudged by the third umpire to have not quite got his fingers underneath a catching attempt from an upwards straight-drive, but the speedster soon removed Babar Azam, who nicked off. It was a big wicket – Babar’s first score under 10 runs in T20Is. Ijaz Patel then claimed his first T20I scalp as Farhan swept straight to Colin Munro, who had looked rather lonely on the leg-side. Recovering from 10/2, Asif Ali and Mohammad Hafeez helped Pakistan reach 50 in the ninth over and they reached their own 50-run partnership the next over, courtesy of a huge six by Asif. Milne returned to remove Hafeez (45 from 36 balls), owed to a brilliant catch by Tim Southee at backward-point. Sarfraz, who tried to unsettle the Black Caps bowlers, began to vindicate his decision to enter the crease ahead of Shoaib Malik. Pakistan scored their runs at a good rate between the 10th and 15th over, reaching three figures despite the loss of Asif by a Colin de Grandhomme slower ball. But some good late-innings death bowling by birthday boy Ish Sodhi and Southee, who was taking the pace off, limited the damage. Corey Anderson delivered a double blow when he took a diving catch at long-off to remove Sarfraz (34 from 26 balls), who hit a six the previous ball, before running out Malik (8) with a direct hit from the deep after a poor call by Faheem Ashraf. Milne and Southee closed out the innings as Pakistan posted 148/6 from their twenty overs, short of the captain’s desired target of “above 160”. It was a score that was made to look more under-par when Colin Munro found form at the top of New Zealand’s order. It was a cagey start at first from Munro and Glenn Phillips, but the former soon went into blitz-mode, striking three straight sixes as New Zealand reached their half-century in the sixth over. Hasan Ali bowled Phillips and spinners Hafeez and Shabad Khan applied the brakes, but New Zealand had the man for the occasion – in 52 of Kane Williamson's T20I matches, he has been dismissed only once by leg-spin. That man was Pakistan’s Shahid Afridi. Munro required just 38 balls to post his half-century, despite affording himself the luxury of playing himself in, but Shadab terminated his innings four balls later. Strength turned weakness when he holed out to mid-on. Williamson tamely gifted one straight back to the bowler, Imad Wasim, who deceived New Zealand’s skipper with a slower ball. De Grandhomme was run out by Shadab and at 89/4 after 13.4 overs, with two fresh batters in the shape of Anderson and Ross Taylor, this marked a critical stage in the chase. After 17.1 overs both sides had sat at 114/4 – it really was neck and neck. Shaheed Afridi had a close lbw shout turned down by both the on-field official and the third umpire via the DRS. Ten runs came off the 18th and Anderson holed out the next over off Hasan (3/35), who then removed Tim Seifert for a golden duck – but Ross Taylor, into the thirties, was still going strong. Seventeen runs were required off the final over with the experienced batsman on strike. Shaheen Afridi, the 18-year-old, was trusted once more and delivered. From a position of strength at 79/1, New Zealand fell away as the leading T20I team in world cricket used every ounce of their experience and confidence to see their side home in this thrilling encounter. The second T20I takes place on Friday 2 November.