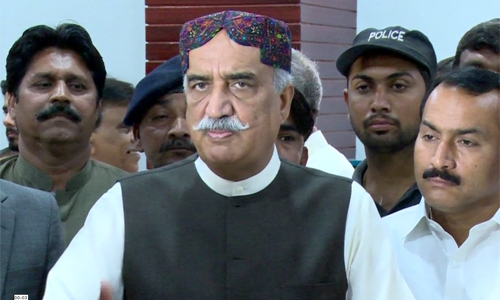 SUKKUR (92 News) – Opposition Leader in the National Assembly Khurshid Shah has said that Pakistan is already burning and it should now play a neutral role in the Yemen issue. Talking to the media at the inauguration of the Computerized Domicile Registration Centre at DC Office on Wednesday, he said that Pakistan has already been entangled in the Afghanistan issue for the last 30 years. “We are paying the price for it and have burned in it. We have to think that it will not be a matter for a day. The PPP’s policy in this regard has been very clear. We did not become a part in the Syria issue and we should now move ahead neutrally,” he said. He added that Pakistan should strive for unity of the Muslim Ummah. Khurshid Shah said that Bilawal Bhutto is holding a meeting in London and the PPP wants to observe death anniversary of the party founder Zulfikar Ali Bhutto at the international level. He said that a new system is being introduced in Sukkur to trace people doing dual government jobs. He asked the people doing dual government jobs to resign from one post otherwise cases will be registered against them. He said that about 2,000-2,500 jobs will be created after the new system.