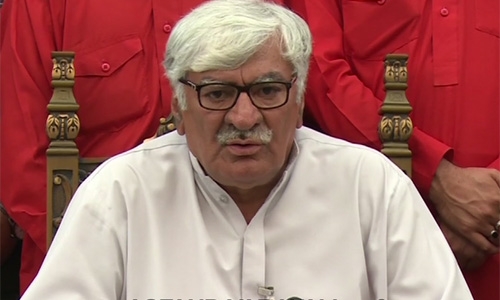 PESHAWAR (92 News) – Awami National Party (ANP) chief Asfandyar Wali has said that Pakistan should not become a party in the Yemen issue. Talking to the media on Tuesday, he said that there is no legal status of the statement of MQM worker Saulat Mirza. He said that the Karachi operation was the need of hour and it was launched after taking all the parties into confidence. Asfandyar Wali was of the view that the local bodies’ elections will be as fair as the Senate elections. “We had asked then government in 80s not to jump into others’ war and now again repeat the same words,” he said. “Pakistan is the only country where the mistake is committed again.” He said that the NFC Award should have been made in accordance with the constitution much before and it cannot be made so till now. The ANP said that the government should immediately arrest the accused if he is operating under the banner of his party. He said that delimitation is the job of the Election Commission of Pakistan not the Khyber Pakhtunkhwa government.