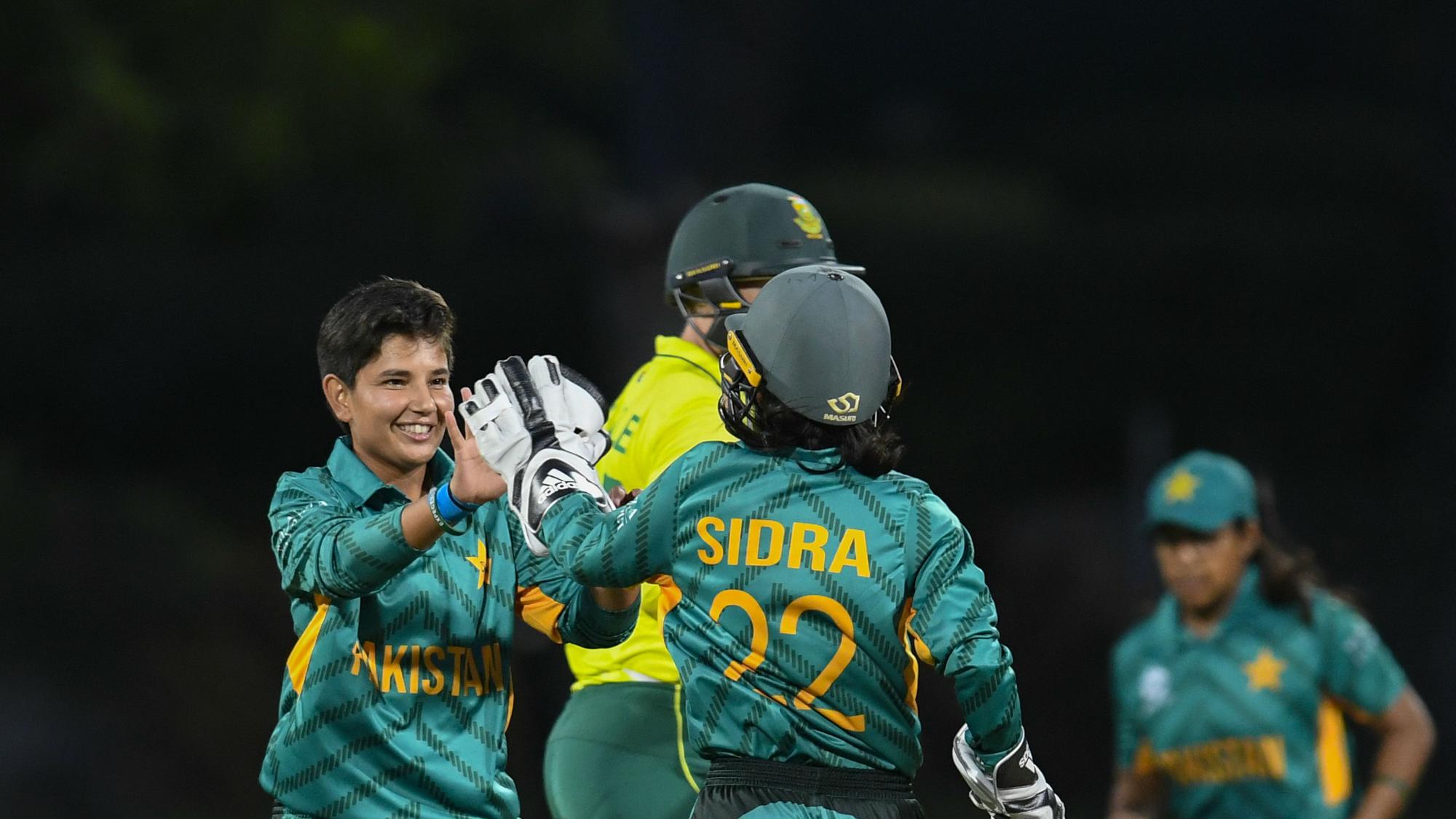 Javeria Khan’s side seals 90-run win, Australia-England match washed out on opening day of ICC Women’s World T20 warm-up matches.
Pakistan produced a fine all-round effort to carve a huge 90-run win over South Africa in a practice match ahead of the ICC Women’s World T20 2018, while another match between three-time champions Australia and ICC Cricket World Cup 2017 winners England was washed out today. Electing to bat, Pakistan posted 162 for five with opener Ayesha Zafar knocking up a brisk 46 off 33 balls with eight fours. Umaima Sohail scored 30 while opener Nahida Khan (27) and Aliya Riyaz (27 not out) were the other main contributors to the score. New-ball bowler Aman Amin then picked two early wickets of Lizelle Lee (3) and Laura Wolvaardt (0) and with Robyn Searle (6) run out by Nida Dar, South Africa were reduced to 17 for three in the fifth over and there was to be no comeback. Pakistan captain Javeria Khan: “We couldn’t have asked for a better start. Everyone played their part and everyone was clinical. Be it batters, bowlers or fielders, everyone executed the plans very well. Beating South Africa so convincingly is a good sign for this team. We will be fearless and try and carry on in this way.” South Africa all-rounder Chloe Tyron: “Pakistan played really well upfront and unfortunately our plans didn’t work out with our bowling and we cost ourselves in the field as well. I felt like all three departments failed us today and we are disappointed but will reflect on this game as a team and come back stronger.” The second warm up fixture between England and Australia was called off before a ball was bowled due to bad weather. Brief scores: Pakistan defeated South Africa by 90 runs Pakistan 162 in 20 overs (Ayesha Zafar 46, Umaima Sohail 30, Nahida Khan 27, Aliya Riaz 27 not out; Sune Luus 2-25) South Africa 72 all out in 15.1 overs (Marizanne Kapp 29, Sune Luus 23, Nida Dar 2-7, Anam Amin 2-11, Sana Mir 2-13) Meanwhile, New Zealand captain Amy Satterthwaite and Sri Lanka captain Chamari Athapaththu interacted with the media in their opening press conferences here. New Zealand captain Amy Satterthwaite: “I think it shows where the women's game has come. It's exciting to think what the future holds, I guess. To have a tournament like this where it’s standalone, it's also an opportunity for us to showcase our skill sets and I guess show the world where the women’s game is at the moment. “I think looking forward to this tournament, we know we need to improve our consistency and probably the discipline with both the bat and the ball. In a tournament like this, you know that you have to perform every single game when you are playing a different team each game. “Obviously to win a World Cup you have to beat all of them. So we know how important that is. Sri Lanka captain Chamari Athapaththu: “So actually I'm really happy about our batting line-up now, (our) new coach is doing a really good job for our team, and a couple of youngsters playing really good, and senior players also doing good. “I think this is a good opportunity for our team to come with the best ranking this time, so I think our team is definitely doing good in T20. We’re playing the top teams because of the ICC championships, so now cricket has become top level. Now we're playing against Australia and New Zealand and England, all top countries. So last time India came to the finals (in the ICC Women’s World Cup 2017), and West Indies won (ICC Women’s World T20 2016), which is good for women's cricket. Also I think the ICC is doing a good job for women’s cricket.”