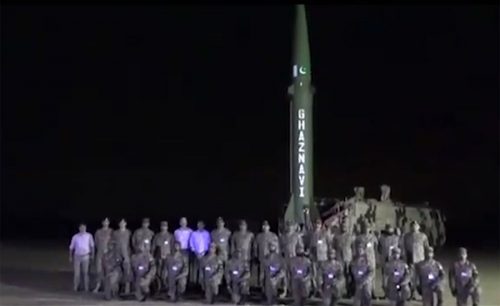 On May 23, Pakistan had successfully conducted the training launch of surface-to-surface ballistic missile Shaheen-II. DG ISPR Maj Gen Asif Ghafoor, in a tweet, said that Shaheen-II is capable of carrying both conventional and nuclear warheads up to a range of 1,500 KMs. He said Shaheen-II fully meets Pakistan’s strategic needs towards maintenance of desired deterrence stability in the region. The DG ISPR said that today’s training launch, having its impact point in the Arabian Sea, was witnessed by Director General Strategic Plans Division, Commander Army Strategic Forces Command, Chairman NESCOM, senior officers from the Army Strategic Forces Command, Scientists and Engineers of the strategic organizations. Meanwhile, Chairman JCSC and Services Chiefs congratulated the scientists and engineers on conduct of today’s successful training launch. President Dr Arif Alvi and Prime Minister Imran Khan have also conveyed their congrats on the achievement.

On April 23, Pakistan Navy had successfully test fired an indigenous Cruise Missile in the North Arabian Sea. According to a spokesman of Pakistan Navy, Vice Chief of the Naval Staff Admiral Kaleem Shaukat witnessed the live firing onboard Pakistan Navy Ship. The spokesman said the Live Weapon Firing was conducted by Pakistan Navy's Fast Attack Craft. He also said the indigenously developed Cruise Missile has anti-ship missile and Land Attack capability. The Pakistan Navy spokesman said that the missile accurately hit its target on land signifying the impressive capabilities of the indigenous missile System. He said this is a clear manifestation of Government's resolve to achieve self-reliance in this field. Speaking on this occasion, the naval staff vice chief expressed his utmost satisfaction on the operational readiness of Pakistan Navy Fleet and commended the efforts of all those involved in achieving this significant milestone. He also reaffirmed the resolve of Pakistan Navy to ensure seaward defence and safeguard national maritime interests at all costs.