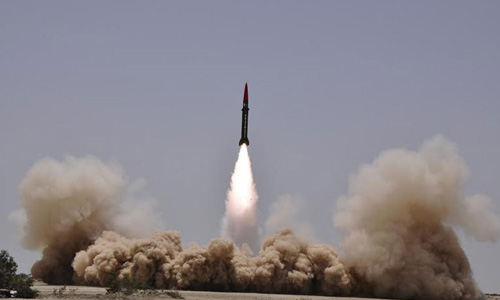 RAWALPINDI - Pakistan on Monday successfully test-fired Shaheen-III Surface to Surface Ballistic Missile, capable of carrying nuclear and conventional warheads to a range of 2750 Kms. In a press release, the Inter Services Public Relations (ISPR) said the test launch was aimed at validating various design and technical parameters of the weapon system at maximum range. “The successful launch with its impact point in the Arabian Sea was witnessed by senior officers from Strategic Plans Division, strategic forces, scientists and engineers of strategic organizations,” the statement said. Strategic Plans Division Director General Lieutenant General Zubair Mahmood Hayat, while congratulating the scientists and engineers on achieving yet another milestone of historic significance, termed it “a major step towards strengthening Pakistan's deterrence capability”. He appreciated the technical prowess, dedication and commitment of scientists who contributed whole heartedly to make this launch a success. He showed his full confidence over the Strategic Command and Control System and the Strategic Forces’ capability to safeguard security of the Mother Land against any aggression. The successful test launch and achievement of this Range milestone has also been warmly appreciated by the President and Prime Minister of Pakistan who congratulated the scientists and engineers on their outstanding achievement. -ISPR