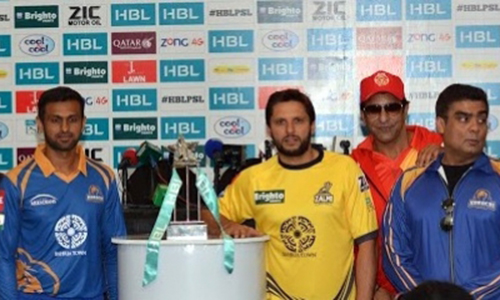 DUBAI (92 News) – With power-packed cricket action ready to take place, the winning team of the first ever HBL Pakistan Super League will win The Shooting Star - a specially designed trophy by Swarovski.

"HBL Pakistan Super League is proud to collaborate with Swarovski - a leading global brand - for the tournament trophies. The Shooting Star carries huge symbolic value since it is the first winning trophy of the tournament and it encapsulates the spirit of our League. Our story is a story of hope and positivity and The Shooting Star is a perfect depiction of this spirit," said Najam Sethi.

Sharing his thoughts on the partnership, Naveed Asghar from HBL said: " HBL is pleased to partner with the Pakistan Super League and we are delighted that Swarovski has designed the trophy for the first ever HBL PSL."

Andrew Mojica, Managing Director, Swarovski Middle East shared his enthusiasm about the arrangement: "We are delighted that the HBL Pakistan Super League has chosen our Shooting Star trophy for the tournament, hopefully this is the first of many collaborations to come.”

Peshawar Zalmi captain Shahid Afridi announced that Javed Afridi, the Peshawar Zalmi owner, will pay for the entry of every Zalmi fan wearing the team’s shirt. Sharing his thoughts, Afridi said: “This will be a great platform for young players to showcase their talent at a global stage!”

Former Pakistani captain Wasim Akram, Director Cricket of Islamabad United, said: “It has taken a long time for this to happen but I am glad that we have our own T20 league. Pakistanis will own this product proudly and I urge the fans to come to the stadium as they will see some exciting cricket.”

Artists Sean Paul and Ali Zafar also spoke to the media as they visited the stadium one day before they take Dubai by storm with their performances.

HBL Pakistan Super League is bringing 24 action-packed cricket games to Dubai and Sharjah from February 4-23, 2016. The tournament starts with a dazzling opening ceremony including performances by Sean Paul, Ali Zafar and Sanam Saeed.