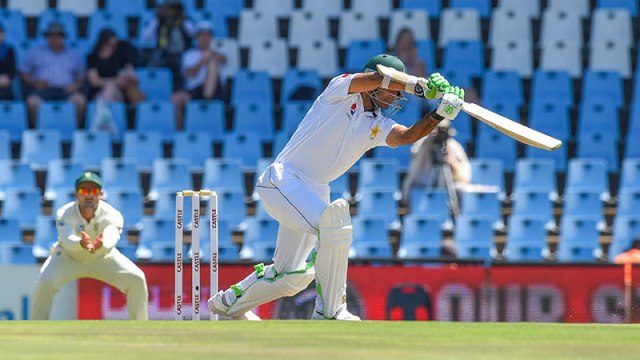 CAPE TOWN (92 News) – In the first day of second Test against South Africa, the top order of Pakistani team were flopped and lost early five wickets. Dale Steyn becomes South Africa’s joint leading wicket-taker. Steyn, Philander early blows on Pakistan as took Opener Imamul Haq and Fakhar Zaman wickets. The Green Shirts managed to score 55 runs in the 20.1 overs of the first innings that they played. Shan Masood is still at the crease with 12 runs to his name after his partner Azhar Ali (2) lost his wicket. However, Asad Shafiq lost his wicket on 20 scores by Kagiso Rabada. Babar Azam only secured four runs and lost his wicket by Olivier. – Return of Pacer Mohammad Abbas – Pakistan will be bolstered by the return of pacer Mohammad Abbas, who missed the first Test with a shoulder injury but has been tipped to be ready for Cape Town. He has made a remarkable start to his Test career with 61 wickets in 12 matches at an average of 16.62. – South Africa’s seamer Vernon returns from injury – South Africa will see the expected return from injury of seamer Vernon Philander, who has 49 wickets at an average of 16.55 at Newlands. Captain Faf du Plessis said on Wednesday that fast bowler Duanne Olivier would be used in an "enforcer" role as part of a pace barrage. There had been speculation that Olivier might have to sit out at Newlands because of the return to fitness of Philander. Du Plessis said he wanted to keep the pressure on the Pakistan batsmen after Olivier took 11 wickets in South Africa´s six-wicket win in the first Test in Centurion. Pitch Condition/Report: The previous three Test matches in Cape Town haven’t produced any big totals. The pitch here has slowed down recently. For the New Year’s Test match, the Newlands has produced a pitch with green tinge which is expected to get dry very soon. However, the ball will be moving off the pitch throughout the game for the fast bowlers with extra pace. Squads South Africa: Faf du Plessis (c), Quinton de Kock (wk), Aiden Markram, Dean Elgar, Hashim Amla, Theunis de Bruyn, Temba Bavuma, Dale Steyn, Keshav Maharaj, Kagiso Rabada, Duanne Olivier, Zubayr Hamza, Vernon Philander, Dane Paterson. Pakistan: Sarfraz Ahmed (c & wk), Imam-ul-Haq, Fakhar Zaman, Shan Masood, Azhar Ali, Asad Shafiq, Babar Azam, Mohammad Amir, Yasir Shah, Hasan Ali, Shaheen Afridi, Mohammad Rizwan, Faheem Ashraf, Haris Sohail, Shadab Khan, Mohammad Abbas. Earlier, South Africa defeated Pakistan by six-wicket in the first Test at Centurion. The South Africa eased to a six-wicket victory over Pakistan as Hashim Amla returned to form with an unbeaten half-century. Chasing 149 to win on the third day of a low-scoring match, Amla finished on 63 not out, while opener Dean Elgar contributed 50 as the hosts struck first in the three-game series. But it was the hosts’ ability to eke out runs on the challenging wicket that proved the difference as Pakistan’s frail batting line-up withered in the face of quality fast bowling. https://92newshd.tv/south-africa-beat-pakistan-by-six-wicket-in-first-test/#.XC2wsWlS8dU   – Pakistan look to fix batting woes against South Africa in 2nd Test – Pakistan’s struggling batsmen must find a way to handle South Africa’s potent pace attack if they are to claw their way back into the three-match series in the second Test that starts on what is likely to be a lively Newlands wicket on Thursday. South Africa claimed the first Test in Pretoria by six wickets inside eight sessions as both bowling attacks found conditions to their liking with seam movement, and at times steep bounce. But it was the hosts’ ability to eke out runs on the challenging wicket that proved the difference as Pakistan’s frail batting line-up withered in the face of quality fast bowling.   https://92newshd.tv/pakistan-look-to-fix-batting-woes-against-south-africa-in-2nd-test/#.XC2wqWlS8dU   – Sometimes you need the hard talk, says Sarfraz Ahmed – Sarfraz Ahmed, the Pakistan captain, admitted morale dropped in the side after the loss in the first Test in Centurion, but said the tough talk from the coach and the support staff was just what they needed to get them ready for the second Test at Newlands. The Pakistan batting crumbled in the Boxing Day Test – and not for the first time in recent months. Mickey Arthur, the coach, reportedly ticked off the middle order, especially the senior players, and Grant Flower, the batting coach, later told reporters that a few batsmen were under threat of being dropped. However, the batsmen appear to have got another chance, with Ahmed announcing on Wednesday, 2 January, the eve of the second Test, that Pakistan would stick to the same batting line-up.   https://92newshd.tv/sometimes-you-need-the-hard-talk-sarfraz-ahmed/#.XC2wR2lS8dU