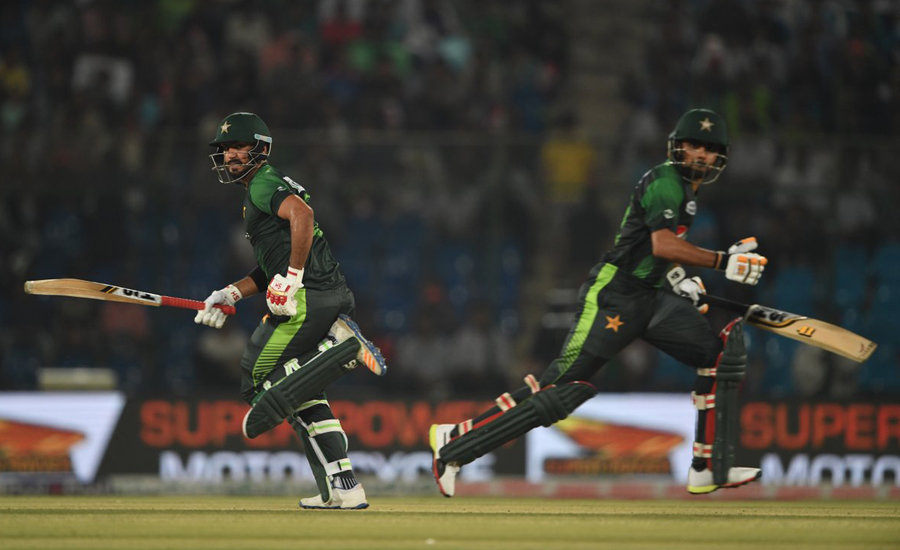 KARACHI (92 News) – As so often in his nascent career to date, Babar Azam first adorned and then dominated a limited-overs innings for Pakistan to take his team to victory at Karachi in the second of three historic T20s, reported the ICC. The win clinched a seventh successive T20I series victory and an eighth win in nine matches in the format. In front of a capacity crowd witnessing the first international men’s series in the city since 2009, Babar stroked a sublime unbeaten 97, an innings studded with 14 crisply struck boundaries and an imperious drive over long on, in the process taking himself to a career-best in the format and Pakistan to a highest-ever T20I total for the second time in two days. At 23, with just 41 ODIs (seven hundreds) and 19 T20Is at an average of 53 behind him, Babar has already established himself as the premier strokemaker in the Pakistani set-up, a slightly-built master of touch and timing whose challenge now will be to improve his modest Test record from 11 matches so far and join the top bracket of world batting stars. It is surely just a matter of time. Pakistan's total, going past 200 for the second time in the series, was never threatened by a raw and inexperienced Windies line-up. The burly right-hander Chadwick Walton flickered briefly at the top of the order in partnership with Marlon Samuels – whose 22-ball 12 failed to ignite the tourists’ chase – but it was never going to be anywhere near sufficient to turn the match into a genuine contest. But while the Windies will be disappointed to have come up short in both matches so far, their sheer presence in Karachi brings with it a feeling of strength in unity and an inspiration for other teams to emulate in due course. While these matches are tough, legitimate international fixtures, they are also deeply symbolic. Babar was not the only batting star on show. Hussain Talat had never played for Pakistan before this series, but after his debut 41 in the first match, the 22-year-old left-hander was in the runs again here, crunching a muscular 63 from 41 balls before falling victim to Odean Smith, the West Indies debutant picking up his maiden wicket in top-level cricket. With the explosive Fakhar Zaman opening with Babar, and Talat coming in at No.3, Pakistan are developing a dynamic and youthful top order to complement a rock-solid middle order of Sarfraz Ahmed and Shoaib Malik, the latter's two outings so far in this series reaping 54 runs from 21 ball – with his 7-ball 17 in this match heaping further pain on a greenhorn Windies bowling unit. In recent years, Pakistan's limited-overs hopes have tended to hinge on a crack bowling unit. If the runs start to flow with regularity, they will take some stopping. And the attack was in full flow again here. Mohammad Amir was once again the pick of the seamers, proving unhittable initially and picking up three wickets later on in the innings, while Shadab Khan continued to beguile, the teenage leg-spinner claiming two wickets, including the big one of Walton, bowled by the googly aiming a hoick over mid-wicket. The teams meet in the third and final match on Tuesday (today). The home side will be desperate to make it a clean sweep on international cricket’s return to Karachi.