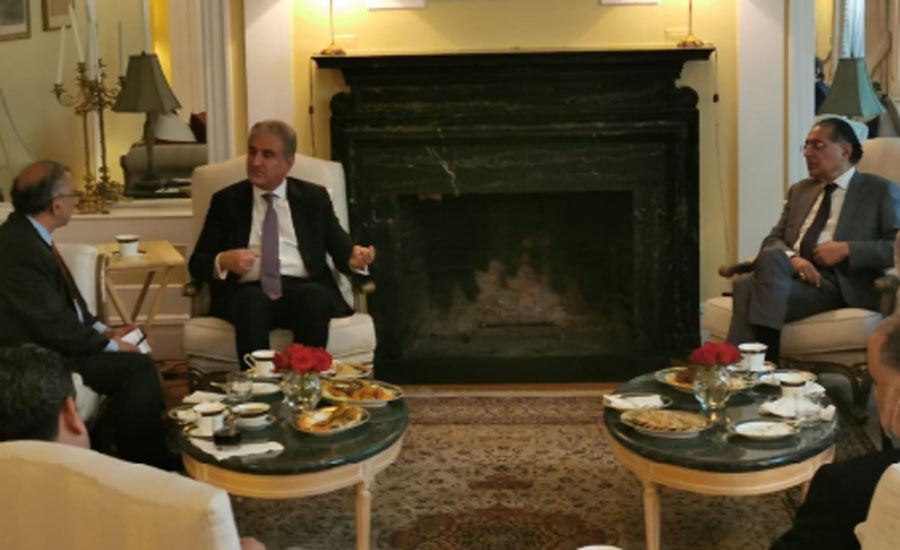 NEW YORK (92 News) - Foreign Minister (FM) Shah Mehmood Qureshi has said that Pakistan would continue efforts for sustainable peace in Palestine and will fight the cases of Palestine and Kashmir on all forums.

Addressing an anti-Israel rally through video link directly from New York held in Multan, he said that Israel had announced ceasefire and termed it victory of Muslim Ummah.

The foreign minister maintained that he had described the similarities between Palestine and Indian Illegal Occupied Jammu and Kashmir, as both nations are fighting for the right to self-determination.

He said that world must pay focus on the Palestine issue as it is going towards the worst situation. I have asked the participants that permanent solution was imperative to resolve the issue otherwise it will affect the whole region.

Meanwhile, addressing Pakistani community in New York, Shah Mahmood Qureshi said we have achieved our first goal in the shape of truce fire announced by Israel and Hamas. He said there are similarities between Palestine and Kashmir issue. Kashmiris are facing the same issues like Palestinians.

The Foreign Minister said we have raised strong voice for the right of Palestinians at the UN General Assembly.

Shah Mahmood Qureshi said Pakistan wants to have cordial relations with everyone. He said our stance on Kashmir issue is very clear and firmed.

He said American Pakistani community is playing key role in economic development of Pakistan. He said the government is trying to provide right of vote to overseas Pakistanis with the aim to empower them.

Shah Mahmood Qureshi says the welfare of overseas Pakistanis and resolving their problems on priority basis is part of the top priorities of our government.

During a meeting with senior Republican Senator Lindsey Graham on the side-lines of his UN-related engagements in New York, Shah Mahmood Qureshi has stressed that peace in Afghanistan is ultimately the shared responsibility of all Afghan parties as well as key international stakeholders.

He said that Pakistan would continue to support efforts for achieving an inclusive political settlement in Afghanistan.

The Foreign Minister appreciated Senator Graham’s efforts for strengthening the Pakistan-US partnership. He said that Pakistan wanted to forge closer economic and trade linkages with the US.

Senator Graham appreciated Pakistan’s support for deepening the peace process in Afghanistan, while underscoring the importance of economic engagement between the United States and Pakistan that would also contribute to regional peace and stability.