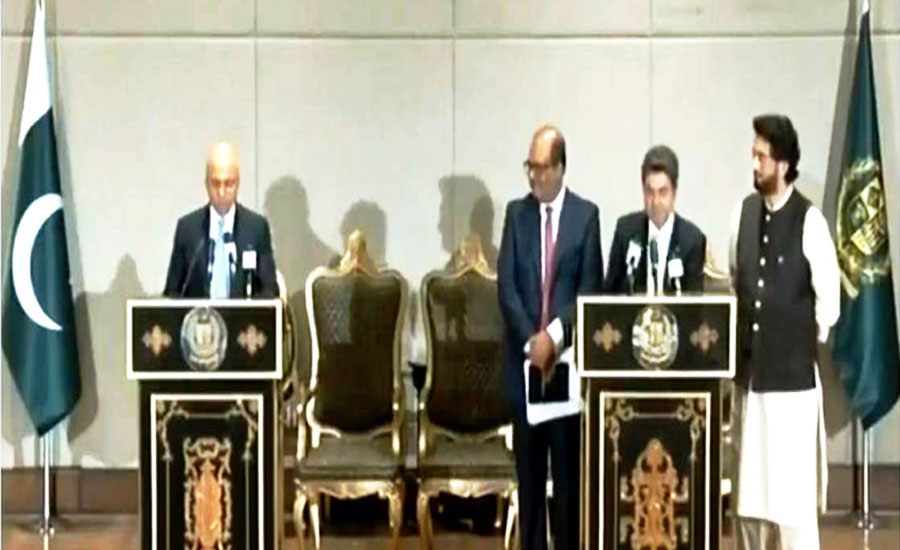 ISLAMABAD (92 News) – Pakistan and the United Kingdom have launched a new initiative on Justice and Accountability to check money laundering. Addressing a joint news conference, along with British Home Secretary Sajid Javid, Law Minister Farogh Nasim and Prime Minister's Special Assistant on Accountability Shehzad Akbar said the declaration will enhance cooperation between the two countries. On the occasion, Sajid Javid said during meeting with Prime Minister Imran Khan, the two countries agreed to track down corruption and make it a priority for both governments. He also said that the UK is most committed and a strong partner of Pakistan. The British home secretary said strong bilateral cooperation is necessary to curb the crimes like flow of illegal money, terrorism, and extremism. He said checking corruption is priority of both the governments as money laundering adversely impacts tax collection and it is a barrier to investment. Sajid Javid expressed the confidence that the new partnership on Justice and Accountability would ensure that no one escapes justice and accountability. He also announced to appoint a new UK envoy on Justice and Accountability, who will help cooperation between the two countries on the subject. The British home secretary said both the countries have agreed to restart bilateral prisoners transfer agreement to help them serve their sentence close to their families. He said the two sides also exchanged views on security and regional stability. He said the United Kingdom is funding projects to make Pakistan prosperous and safe. The UK minister held out an assurance that even after leaving the European Union, his country would maintain and increase the level of access that Pakistan currently has to UK market. He said more UK based companies have expressed their keen interest to have business with Pakistan. To a question he said the United Kingdom recognizes contribution and sacrifices of Pakistan in the war on terror. He said the UK will also help Pakistan meet requirements of Financial Action Task Force. Special Assistant to the Prime Minister Shahzad Akbar said that Pakistan and the United Kingdom have also discussed institution of a joint fund for civil recovery of stolen assets. He welcomed announcement of UK for appointment of a Crown Prosecution Service at British High Commission in Islamabad. Replying to questions, the law minister said no individual or specific cases for extradition were discussed with the UK delegation.