Pakistan vs Australia: first T20 match ended without any result

Pakistan vs Australia: first T20 match ended without any result

SYDNEY (AFP/92 News) – The first T20 between Pakistan and Australia in Sydney ended without a result after it was called off on Sunday due to rain. Australia were 41-0 after 3.1 overs in pursuit of their revised 119-run target against Pakistan on Sunday when rain interrupted play for the second time, eventually forcing the first T20I – already reduced to 15 overs – to be abandoned. Following a rain delay in Pakistan's innings, a revised target of 119 runs from 15 overs was set for Australia. The match was reduced to 15 overs of play per side following the delay. The hosts put 41 runs on the scoreboard after 3.1 overs before rain struck again. Skipper Aaron Finch put 37 runs on the scoreboard batting alongside DA Warner (2).

Captain Babar Azam played handsomely with 59 runs of 38 balls only, including 5 fours and two six, taking him to a strike rate of 155.26. Wicketkeeper Mohammad Rizwan made comparatively better score of 31 runs of 33 balls with one four and one six. Fakhar Zaman was out for no runs in the over of Mitchell Starc, followed by Haris Sohail, who could only get four runs of six balls with one boundary. Asif Ali made only 11 runs of 10 balls with one six. Rain interrupted play with the tourists 3-88 in the 13th over with Babar Azam on 43* and Asif Ali on 10 not out. Heavy rain and storms are forecast during the afternoon in Sydney, and the covers were also briefly needed between the toss and start of play. Australia struck early to send Fakhar Zaman and Haris Sohail back to the pavilion after Australia won the toss and put Pakistan into to bat in the first of three T20s against top-ranked Pakistan. Zaman went back to the pavilion witha duck, while Sohail stuck around to score four runs before being edged out to Steve Smith at backward point. Mohammad Rizwan was the third to depart after being bowled out by Ashton Agar for 31. 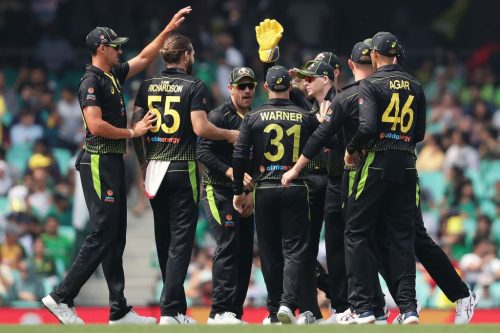 Earlier, Australia won the toss and elected to field first against Pakistan in the first of three T20Is matches. 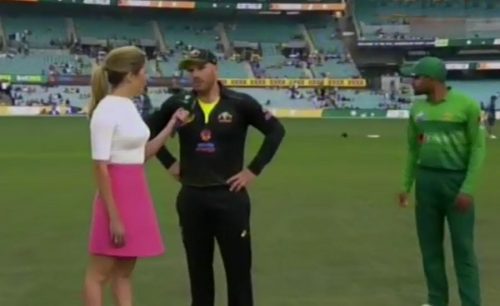 Australia, who are in form and fresh from a 3-0 series sweep against Sri Lanka, won the toss and chose to bowl first. In contrast, Pakistan were embarrassed recently by a second-string Sri Lanka at home across three matches last month. The world’s number one ranked T20 batsman Babar Azam is captaining the team as he tries to re-build for the World Cup next year. Of note, 37-year-old seamer Mohammad Irfan features for the first time in more than three years. Australia kept the same side that beat Sri Lanka by seven wickets on Friday. "With a little bit of weather around we want to hopefully get some early wickets," said skipper Aaron Finch, as the first raindrops of the day started to fall. "They’ve got a really well-rounded side," he added of Pakistan. After Sydney, the series moves to Canberra on Tuesday before a final game in Perth before the sides face each other in two Tests. In his first assignment as Pakistan's full-time Twenty20 International captain, Babar Azam has been tasked with stopping the juggernaut that is Australia at the moment, when they clash in the first of three T20Is in Sydney on Sunday, 3 November. Azam, who was named Sarfaraz Ahmed's successor as the new T20I captain after Pakistan's 3-0 defeat at home against Sri Lanka, will want to make a strong impression in his first game as the side's skipper. However, he will also be aware that winning against Australia, especially in their current form, will be no easy task. Australia come into this series on the back of thumping 3-0 win against Sri Lanka. They won each of those games convincingly, and the hallmark of their win was that there were contributions from all corners. Australia: Aaron Finch (capt), David Warner, Steve Smith, Ben McDermott, Ashton Turner, Alex Carey, Ashton Agar, Pat Cummins, Mitchell Starc, Kane Richardson, Adam Zampa Pakistan: Fakhar Zaman, Babar Azam (capt), Haris Sohail, Mohammad Rizwan, Asif Ali, Iftikhar Ahmed, Imad Wasim, Wahab Riaz, Shadab Khan, Mohammad Amir, Mohammad Irfan Umpires: Gerard Abood (AUS and Paul Wilson (AUS) TV Umpire: Shawn Craig (AUS) Match Referee: Javagal Srinath (IND)