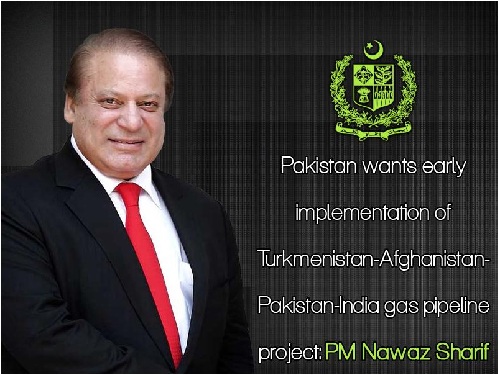 ISLAMABAD (Web Desk) - Prime Minister Nawaz Sharif on Wednesday stated that Pakistan wants early implementation of Turkmenistan-Afghanistan-Pakistan-India gas pipeline project as it is very important for the regional countries. He gave these remarks while talking to Petroleum Ministers of Turkmenistan, Afghanistan and India who met him in Islamabad. Minister for Petroleum and Natural Resources Shahid Khaqan Abbasi was also present. The Prime Minister said Pakistan will play positive role for early progress on TAPI gas pipeline project. He said delay in the project will add to its cost. Nawaz Sharif said Pakistan is facing acute shortage of gas and that TAPI project will help Pakistan to overcome gas shortage. He said we have to take all possible steps for early starting of this project.