ISLAMABAD (92 News) – Opposition leader in National Assembly Shehbaz Sharif on Thursday said that Pakistan will not tolerate any nonsense from eastern border. Addressing the joint session of parliament, Shehbaz Sharif said that Pakistan is united and the entire nation is speaking with one voice. “We should join our voices to convey a clear message to New Delhi and Modi, he added.

He said that the war hysteria was created in the back of Pulwama attack. “War is not solution of any problem; finally you have to come to the negotiation table,” he mentioned. “World knows Indian Prime Minister Narendra Modi is a terrorist. He martyred thousands of Muslims in Gujrat. He was also termed ‘butcher of humanity,” Shehbaz criticized. Terming the current scenario as significant in Pakistan’s history, Shehbaz Sharif said that they have to work with collective insight and wisdom.

Pakistan should continue its diplomatic support to Kashmiris

The opposition leader lamented that the valley of Kashmir has been turned into bloodshed while Pakistan is facing a wicked enemy. He further said that Pakistan should continue its diplomatic support to Kashmiris. “Kashmir issued should be resolved in accordance with the wishes of Kashmiris,” he maintained.

The Pakistan Muslim League-N (PML-N) appreciated the armed forces for their action against Indian Air Force warplanes. “After 1971, Pakistan’s borders have been violated which is a heinous crime. The Indian planes came 4km into our space. But Pakistan Air Force retaliated effectively while recalling the memories of 1965 war,” asserted Shehbaz. Shehbaz Sharif continued, “Our brave armed forces, PAF officers and soldiers deserve commendation. Their timely response has made us proud.”

Hassan Siddiqui is a national hero

“Pakistan has faced every sort of terrorism and lost 70,000 people in war against terrorism. No other country has faced such number of causalities. Army, police, traders, mothers, sisters and sons have laid their lives for this country,” he said.

Earlier, Giving the policy statement during a joint session of the Parliament, Prime Minister Imran Khan announced to release Indian pilot Abhinandan as goodwill gesture tomorrow. He said that Pakistan is a peace-loving country and will take each step for establishing peace. “After winning the elections, I had decided to resolve all issues through dialogues. Unluckily, war mania continued to increase in India. No autonomous country allows the violation of its border,” he declared. The prime minister said that he had already stated that Pakistan will take two steps for peace in response to India’s one. He thanked the opposition for showing unity. He said that peace is vital for progress in the subcontinent, which is marred by poverty. “We should resolve our issues through dialogues. I wrote a letter to Indian Prime Minister Narendra Modi, but he did not respond,” he said. 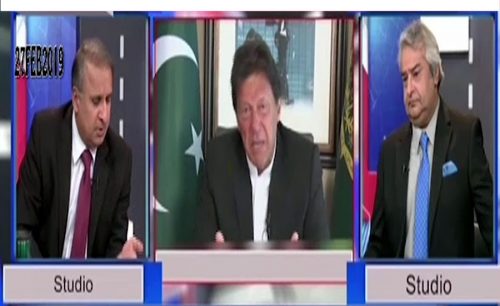