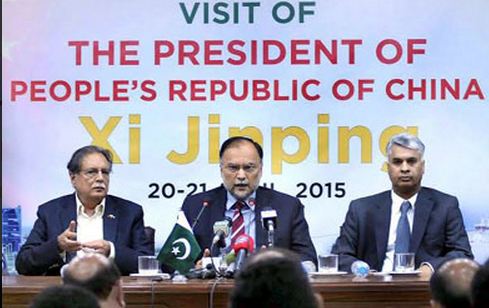 ISLAMABAD (92 News) – Federal Minister for Planning and Development Ahsan Iqbal on Sunday said Pakistan will soon become economic tiger of Asia with Chinese cooperation. Addressing a news conference along with Minister for Information and Broadcasting Pervaiz Rashid, he said Pak-China strategic and political partnership remained top priority of all previous governments of Pakistan but the economic sector was missing. He said with the cooperation of China, Pakistan will become economic tiger of the Asia within a few years. He said China is ready to provide all-out support to Pakistan to achieve the economic targets. The Minister said during the visit of Chinese President, MoUs worth 45 billion dollars will be signed in energy, basic infrastructures, industrial collaborations and other sectors. He said under the bilateral energy cooperation, projects worth 37 billion dollars will be started. He said these projects will generate 16,400 megawatt of electricity. He said out of this 10,400 MW projects will be selected as early harvest projects and completed by 2018. Ahsan Iqbal said these projects will be in coal, hydel, solar and wind energy sectors. The Minister said with the cooperation of China different projects will be started in Thar to generate 6600 MW electricity. The Minister said under the second pillar of China Pakistan Economic Corridor Gadawar Port projects will be upgraded. Ahsan Iqbal said under the third pillar of China-Pakistan Economic Corridor different highways and express ways will be constructed. He said the focus will be on Karakoram Highway while Khunjrab to Dry port road will also be upgraded. The Minister said under the fourth pillar of the project, industrial collaboration will be enhanced and special economic zones set up in all parts of the country. The Minister said to remove the sense of deprivation of Baloch people, the government has started a number of development projects in the province. He said the Prime Minister will soon launch Kachi canal project that will irrigate one hundred thousand acres of land.