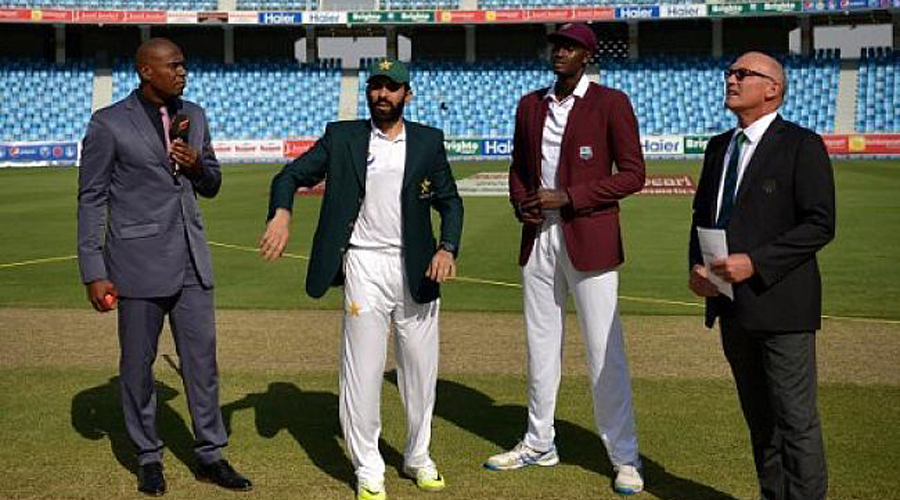 ABU DHABI (92 News) – Pakistan captain Misbah-ul-Haq on Friday won the toss and decided to bat first in the second Test of three-match series against West Indies in Abu Dhabi. Both teams will the match with red ball after the first was played with a pink ball and in day-night format. Pakistan, leading the three-match series 1-0, will once again like to assert their domination over the West Indies with another good win. In the pink-ball Test, Pakistan managed to beat West Indies in a thriller which could have gone either way. Azhar Ali scored a triple ton and Pakistan took a big first innings lead but were bundled out for 123 in the second innings as Devendra Bishoo took 8 wickets. West Indies looked good to chase the target of 357 with Darren Bravo scoring a ton but Yasir Shah dismissed him and West Indies slipped from there to lose the match by 56 runs. Catch the live cricket scores and live cricket updates of PAK vs WI second Test here. Riding on heart-warming performances by Darren Bravo and Devendra Bishoo, West Indies almost snatched victory from the jaws of defeat in the first Test in Dubai. However, the home side just about managed to sneak through by 56 runs. The Test certainly had its fair share of sharp twists and turns. Azhar Ali's memorable triple-hundred put Pakistan in cruise control and then Yasir Shah became the joint second-fastest to register the landmark of 100 Test scalps. Just when it felt as if Pakistan were surging towards an easy win, Bishoo's 8 for 49 gave the visitors a glimmer of hope of putting it past Pakistan. Pakistan head coach Mickey Arthur expects a strong response from the West Indies in the second Test in Abu Dhabi after the tourists came close to pulling off a remarkable comeback in Dubai. Pakistan were forced to ward off a challenge from Darren Bravo, whose pugnacious 116 gave the West Indies hopes of an upset before ultimately losing by 56 runs in the last hour on the fifth and final day. That gave Pakistan a 1-0 lead in the three-match series, but Arthur urged his team not to lose their edge ahead of Friday’s second Test. Misbahul Haq, the Pakistan captain, hinted that Zulfiqar Babar, the experienced left-arm spinner, could be drafted back in after sitting out the Dubai game. If he is named in the XI, it is likely that one of the three pacers who played the first Test will sit out. Similarly, with Younis Khan available for selection, one of the batsmen will have to make way. West Indies, meanwhile, is likely to remain unchanged. The third and final Test will be played in Sharjah from October 30.   Teams (from): Pakistan: Misbahul Haq (capt), Azhar Ali, Sami Aslam, Asad Shafiq, Younis Khan, Babar Azam, Sarfraz Ahmed (wk), Mohammad Nawaz, Mohammad Amir, Wahab Riaz, Yasir Shah, Zulfiqar Babar, Rahat Ali, Sohail Khan, Imran Khan. West Indies: Jason Holder (capt), Kraigg Brathwaite, Devendra Bishoo, Jermaine Blackwood, Carlos Brathwaite, Darren Bravo, Roston Chase, Miguel Cummins, Shane Dowrich (wk), Shannon Gabriel, Shai Hope, Leon Johnson, Alzarri Joseph, Marlon Samuels, Jomel Warrican.