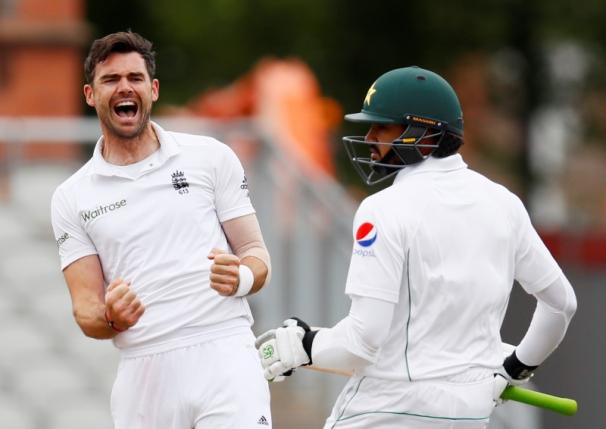 MANCHESTER – Seamer James Anderson and off-spinner Moeen Ali took two wickets apiece as Pakistan slid to 145 for five at tea on the fourth day of the second Test against England at Old Trafford on Monday. Facing a huge task to avoid defeat having been set a distant target of 565, Pakistan found batting no easier second time round after scoring 198 in their first innings in reply to England's 589 for eight declared. The hosts, with skipper Alastair Cook and Joe Root blazing away, added a quickfire 75 in nine overs having reached 98 for one the previous evening, before declaring. Anderson struck to remove Shan Masood for one, the opener edging a ball to Cook at first slip that moved away, and trap Azhar Ali plumb lbw for eight. Younus Khan had a left-off before lunch when he was dropped in the slips by Cook off Ben Stokes. It proved a frustrating day for Stokes who later limped off with a calf injury. He will take no further part in the game, although England are unlikely to need him as Pakistan lost three more wickets after lunch. Opener Mohammad Hafeez had looked reasonably secure but fell on 42 when he was caught by Gary Ballance at short-leg off of a full delivery by Moeen. Younus continued to live dangerously and his patience snapped when he tried to launch a Moeen delivery over the long-on boundary but was caught inside the rope by Alex Hales for 28. Captain Misbah-ul-Haq smashed Moeen for a six and played aggressively for his 35 before he was bowled by Chris Woakes off an inside edge just before tea. England, trailing 1-0 in the series after defeat at Lord's, had not enforced the follow-on and Cook and Root quickly piled on the runs in the morning session, the captain making 76 not out and Root finishing unbeaten on 71. Pakistan would have to score the highest total achieved in a Test-match run chase to win. The record is 418. SCOREBOARD