Pakistan choose to bat in the second Test against New Zealand 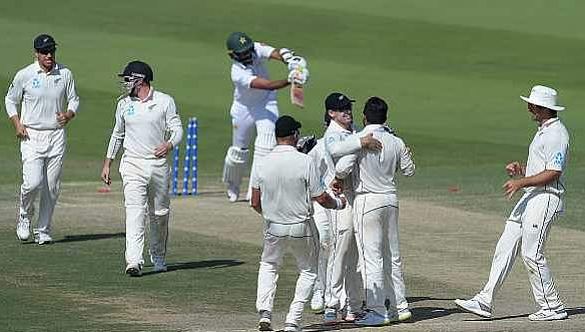 Pakistan choose to bat in the second Test against New Zealand

DUBAI (Web Desk) – Pakistan have won the toss and elected to bat in the second Test against New Zealand in Dubai on Saturday. The last time New Zealand won a Test series in Asia was in 2008, against a still-developing Bangladesh side. Their last and till date only away Test series victory against Pakistan dates back to 1969. Now, New Zealand will lick their lips at the prospect of repeating the rare feat, happy in the knowledge that they have to just win one of the two remaining games. While New Zealand will be extremely motivated to do well, they know that Pakistan will pull all stops to try and avert the possibility of that. Pakistan have a proud Test record in their adopted ‘home’ country, and will not want to blemish it with a series loss. Pakistan will need their batsmen to show greater discipline and nerves than they did in their second innings of the first Test, losing their last seven wickets for a measly 41 runs to concede a match they were in total control of. Although aided by plenty of poor shot selections by the Pakistan batsmen, New Zealand’s bowlers must pat themselves on the back for building the pressure that caused those errors. Ajaz Patel was very impressive on debut. He got the ball to rip prodigiously and was unrelentingly accurate. The quicks Trent Boult and Neil Wagner also had a say in Pakistan’s first and second innings respectively. The only cause for worry will be leg-spinner Ish Sodhi’s accuracy, or the lack of it. Although he got the ball to turn, he was unable to hit the right areas, often serving up full tosses or over-pitched deliveries. Should he find his rhythm, he could well be another menace for Pakistan. Even the New Zealand batsmen should get credit for doing reasonably well in the second innings, scoring 249 on a difficult strip although they were bundled for a meagre 153 in the first innings. Skippper Kane Williamson led from the front with scores of 63 and 37, while others like Jeet Raval, Henry Nicholls and BJ Watling also contributed with valuable scores. Pakistan’s bowling has looked good throughout the Test season stretching back to the first game against Australia in the preceding series. Not just the spinners, but also the pacers have enjoyed success. In fact, Hasan Ali was the standout bowler for Pakistan in the first Test, taking a total of seven wickets, exploiting reverse swing to great effect. Leggie Yasir Shah did bag eight wickets but conceded a lot more runs. In general, Pakistan’s spinners didn’t do much wrong but will want to make a more telling impact. But batting will remain the chief concern. Pakistan have a lot of skilled Test batsmen, but they just need to apply themselves. Azhar Ali held fort brilliantlly in the second innings and battled on till the end with a gritty fifty. Other Pakistan batsmen will want to take a leaf out of his book. It will help if other seniors like Sarfraz Ahmed and Mohammad Hafeez also lead by example. Key players Azhar Ali (Pakistan): The biggest disappointment for Pakistan from the first game will be the rash shots that cost them wickets and ultimately the game. Only Ali displayed the resilience to stay on till the very end with a dogged 65 although he came into the game with patchy form. He will draw a lot of confidence from that knock, and will hope to impart solidity to the line-up. Neil Wagner (New Zealand): The fast bowler has shaped into New Zealand’s go-to man regardless of conditions. His ability to force out wickets against the run of play came to the fore when he snapped an 82-run stand between Asad Shafiq and Ali, opening the gates for the collapse. His nagging short bowling tactics can be a little expensive sometimes, but it almost always brings him crucial wickets. Squads Pakistan: Sarfraz Ahmed (c & wk), Asad Shafiq, Azhar Ali, Babar Azam, Bilal Asif, Faheem Ashraf, Haris Sohail, Hasan Ali, Imam-ul-Haq, Mir Hamza, Mohammad Abbas, Mohammad Hafeez, Saad Ali, Shaheen Shah Afridi, Yasir Shah New Zealand: Kane Williamson (c), Tom Blundell, Trent Boult, Colin de Grandhomme, Matt Henry, Tom Latham, Henry Nicholls, Ajaz Patel, Jeet Raval, Ish Sodhi, William Somerville, Tim Southee, Ross Taylor, Neil Wagner, BJ Watling (wk).  .