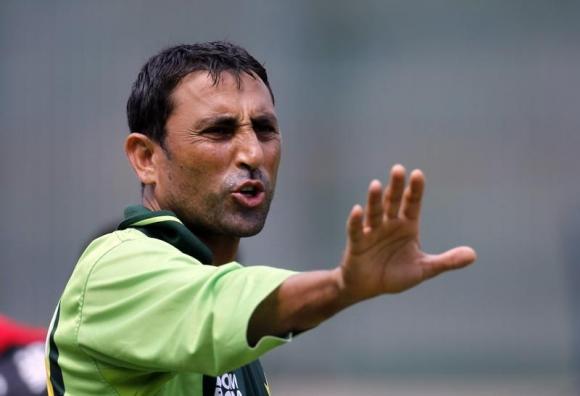 BRISBANE (Reuters) - Speculation is rife that Younis Khan will quit one-day cricket after the World Cup and chances are it would be far from a fairytale farewell for one of Pakistan's modern batting greats. Runs have dried up, his team's World Cup campaign is in disarray, fans back home are fuming and pundits, including some of his former team mates, consider him a burden on a team beset with many other problems. The 37-year-old was not considered an automatic choice for the World Cup but a century against New Zealand in Abu Dhabi in December and the experience of 250-plus ODIs earned him a place in the 15-member squad. The former captain, so far, has failed to justify his selection for a fourth World Cup appearance, managing six runs against arch-rivals India and being out for a golden duck against West Indies. "I beg of Younis. Thank you for your services to Pakistan cricket but please leave this ODI side now," former test captain Rameez Raja said. "I think Younis should tell the management he should be rested." Younis' former team mate Shoaib Akhtar has also joined the chorus demanding his retirement but the batsman with more than 15,000 international runs against his name can also blame his blip on a gamble that backfired on Pakistan. Against India, Younis was asked to open the innings, just the third time in his 263-match ODI career and his struggle against the new ball was evident in the way he was dismissed. Younis could neither duck under Mohammed Shami's bouncer nor could he pull it as the ball hit his glove and lobbed up for wicketkeeper Mahendra Singh Dhoni to take the catch. ROCKET SCIENCE Batting great Javed Miandad was among those furious with the experiment. "What's the rocket science of promoting Younis Khan as an opener?" Miandad wrote in his column for the International Cricket Council (ICC) website. "If you are not an opener you tend to struggle against the new ball and if you are not in form, it only compounds your problems," said the former Pakistan captain. Against West Indies, Younis batted at number three but the Pakistan innings was just two-balls old when he had to walk out to join Ahmed Shehzad after opener Nasir Jamshed fell for a duck. A laden-footed Younis nicked the first ball he faced from Jerome Taylor behind as Pakistan slumped to 1-4 before succumbing to their second successive defeat in the tournament. As Misbah-ul-Haq and his men prepare for their next match against Zimbabwe on March 1, Miandad perhaps has the best suggestion how to make the best use of cricketer who led Pakistan to their Twenty20 World Cup triumph in 2009. "The top four batting spots are specialists' slots and those who are in form should raise their hands for it. "If Younis has to be slotted in the playing XI, then he should come down the order when the ball gets a bit old."