Pakistan yet to take significant action against Taliban: US general 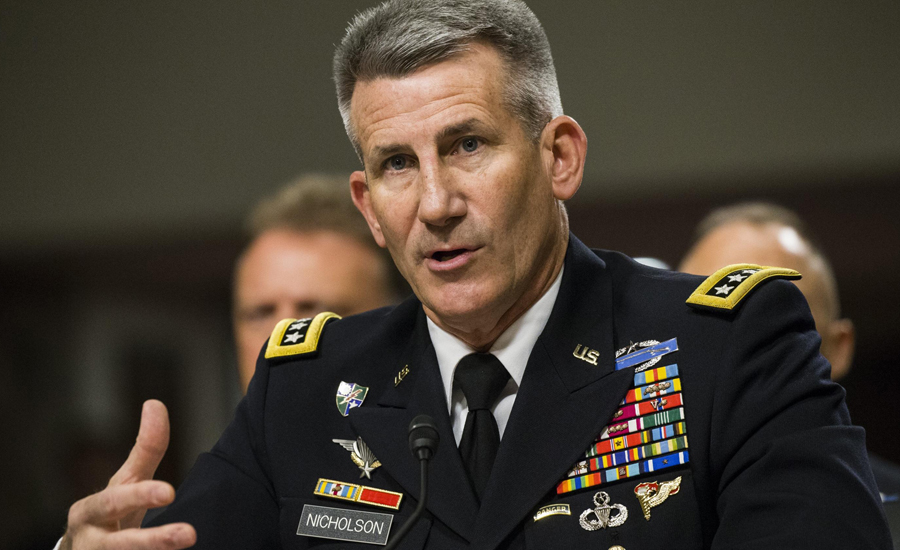 Pakistan yet to take significant action against Taliban: US general

WASHINGTON (92 News) - It's been nearly 100 days since President Donald Trump announced his new strategy for Afghanistan and the wider region, a strategy that demanded Pakistan do more to fight the Taliban, but Pakistan has yet to take significant action against the Taliban, Commander of US and international forces in Afghanistan General John Nicholson said. While Nicholson acknowledged that the Pakistanis had taken military action against other violent extremist groups, he said that Islamabad needed to act against the Afghan Taliban, which has found sanctuary inside Pakistan since 2001. "The offensive operations against sanctuaries would be in other areas that we've identified with the Pakistani leadership on a number of occasions," he said. The general would not say how much time the US would allow for Pakistan to change its behavior before taking additional actions to compel Islamabad to crack down on Afghan Taliban sanctuaries in Pakistan. "As you've heard our president say, as you've heard all of our senior leaders say, we have got to see movement on this reduction of sanctuary and support for those insurgents and terrorists operating from Pakistan who are attacking our forces and our coalition diplomats and forces, as well as the Afghans," Nicholson said. Nicholson later said that while the Taliban's tactical-level commanders were in the field in Afghanistan, its "senior leadership still resides in Pakistan." He said the Taliban leaders were "living in comfort outside of the country with plenty of drug money" while the rank and file fighters were dying in Afghanistan. As part of the effort to make the Taliban more uncomfortable, in line with his new strategy, Trump granted Nicholson the authority to target the Taliban's sources of revenue.