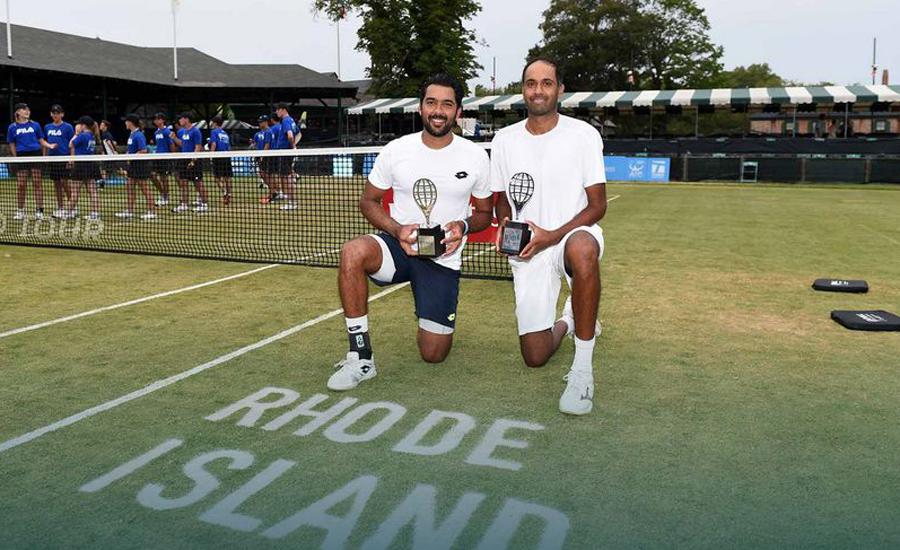 NEWPORT (92 News) – Pakistani tennis star Asamul Haq and Rajeev Ram of the United States have on Sunday won the doubles title of ATP Hall of Fame Tennis Championship in Newport. Playing together for the first time this week, Aisam-Ul-Haq Qureshi and Rajeev Ram notched the doubles title at the Dell Technologies Hall of Fame Open. Qureshi and Ram defeated Aussie duo Matt Reid and John-Patrick Smith 6-4, 4-6, 10-7. The win came one day after rallying past third seeds Sam Groth and Leander Paes 11-9 in a Match Tie-break, saving eight match points. It was the second doubles title in Newport for both players, with Qureshi prevailing in 2015 with Jonathan Marray and Ram in 2009 with Jordan Kerr. In total, Qureshi captured his 15th ATP World Tour doubles crown and fourth of the year (with four different partners). For Ram, it was title No. 13 and his third of the season. "It's been a pleasure to play with Rajeev," said Qureshi. "It's been a great week. I love Newport and I love coming back here. He's won so many titles on grass so it was a perfect combination. Hopefully we can play in the future again. Winning a tournament when playing together for the first time is a great feeling." The Pakistani-American tandem split $29,010 in prize money and 250 Emirates ATP Rankings points. Ram is now a two-time singles and two-time doubles champion in Newport. He defeated Sam Querrey for his maiden title in 2009 and emerged victorious again in 2015, defeating Ivo Karlovic in a deciding tie-break.