Pakistani new envoy to US presents credentials to Trump 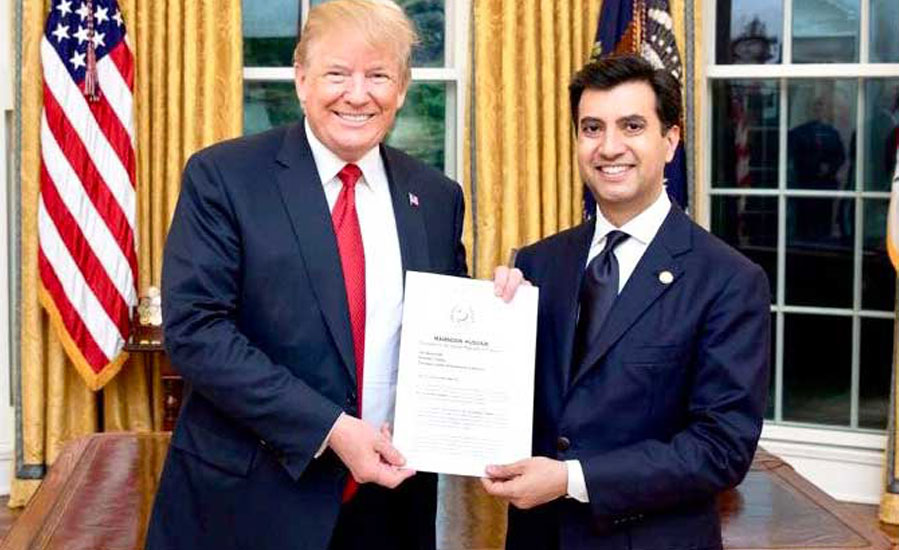 Pakistani new envoy to US presents credentials to Trump

WASHINGTON (92 News) – Pakistan's new ambassador to the United States Ali Jahangir Siddiqui presented his credentials to US President Donald Trump. The embassy spokesperson said that Ali Jahangir held short meeting with Trump. During the meeting, they exchanged the views about bilateral relations and mutual cooperation. During his visit to the White House, the envoy presented his credentials to the US president where after he can officially start working as a diplomat. He assumed charge as ambassador to the United States on 30th of last month. Earlier, Ali Jahangir Siddiqui replaced Aizaz Ahmad Chaudhry as Pakistan’s ambassador to the United States. A farewell party was also arranged in honor of the outgoing Pakistani Envoy to US Aizaz Ahmad Chaudhry. Siddiqui was named the ambassador on May 8 after Aizaz Ahmed Chaudhry, his predecessor, stepped down from the position. The new envoy reached Washington, DC on May 29 and assumed his new role of ambassadorship on May 30. On March 22, the anti-graft watchdog’s Lahore chapter had launched an investigation against Pakistan’s newly appointed ambassador to the US Ali Jahangir Siddiqui and summoned him but he didn’t show up. The NAB said that Ali was handed over a 2-page questionnaire which has also not been submitted. The newly appointed ambassador has been accused of illegally transferring 23 million Euros abroad to purchase an Italian company and his involvement in a corruption scandal worth Rs40 billion. The Bureau is likely to include his name in the Exit Control List (ECL). Siddiqui is to assume his new responsibilities as Pakistan’s ambassador in Washington next month. He had been working as the special adviser to the prime minister for the last six months.