Pakistanis are happier than Indians: Report

Pakistanis are happier than Indians: Report

ISLAMABAD (92 News) – Despite facing severe challenges, Pakistanis are happier than Indians once again, according to a United Nations-sanctioned report released on Tuesday.

According to the World Happiness Report 2017 released, India ranked 122nd, behind Pakistan and Nepal, which is struggling with poverty, in the global list of the happiest countries. India has slipped four positions from its previous rank of 118 this year.

Among the eight SAARC nations, Pakistan was at 80th position, Nepal stood at 99, Bhutan at 97, Bangladesh at 110 while Sri Lanka was at 120. However, Maldives did not figure in the World Happiness Report. 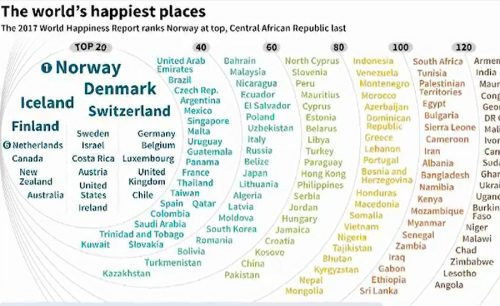 Norway displaced Denmark as the world’s happiest country in a new report released on Monday that called on nations to build social trust and equality to improve the wellbeing of their citizens.

The Nordic nations are the most content, according to the World Happiness Report 2017 produced by the Sustainable Development Solutions Network (SDSN), a global initiative launched by the United Nations in 2012.

The rankings are based on gross domestic product per person, healthy life expectancy with four factors from global surveys. In those surveys, people give scores from 1 to 10 on how much social support they feel they have if something goes wrong, their freedom to make their own life choices, their sense of how corrupt their society is and how generous they are.