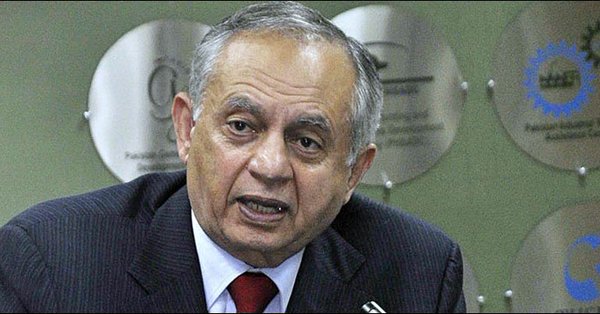 ISLAMABAD (92 News) – Advisor to Prime Minister on Commerce Abdul Razzak Dawood Monday said that Pakistan’s exports have registered an increase of 4 per cent in last seven months of current fiscal year 2018-19. Addressing a press conference along with Secretary Commerce Mohammad Younus Dhaga at Ministry of Industries and Production, the PM’s adviser said that the decisions regarding the economy have started yielding positive results. “Due to the increase in exports and decrease in imports, the country's trade deficit shrank by $2.1 billion,” Razzak Dawood said. He said the ban on the import of furnace oil and non-essential food items also benefitted the economy. Razzaq Dawood said exports in the first seven months of current fiscal year remained 13.259 billion dollars. “The imports remained 32.54 billion dollars as compared to 34.26 billion during the corresponding period last year,” he added. He said the trade deficit has reduced from 21.3 billion dollars to 19.2 billion dollars. “This translates into 30 per cent increase in terms of Pakistan rupee. The result of currency devaluation will be visible on exports trajectory in the coming five months,” the PM’s adviser mentioned. Razzak Dawood expressed confidence that exports will increase and imports further decrease this year. He said cements exports have registered an increase of 50 percent, mainly to Sri Lanka and Bangladesh. He said that exports mostly increased in food items, textiles and cement, while overall 50 percent cement exports were increased in seven months of current fiscal year. To another question, the adviser said that edible oil imports reached at $3 billion, which needed to be decreased for maintaining balance of trade. He hoped that in coming five years, imports would be decreased more and the country's exports would further increase. Speaking on the occasion, Secretary Commerce Younus Dagha said improvements have also been noted in balance of trade in the month of January. He said need of furnace oil has reduced due to increasing use of renewable technologies in the energy mix. Dhaga said the government was also negotiating with Latin American countries including Brazil and the US for exploring new trade avenues to increase trade volumes with these countries. Earlier today, Finance Minister Asad Umar said that investment will come to the country with an increase in the investment. “Natural gas has been discovered in Khyber Pakhtunkhwa, while CPEC project is underway in collaboration with China which is a good sign. He declared there will be no deal or ‘dheel’ (concession). “Now Saad Hariri has also refused to strike the NRO in future,” he said. The minister said that the IMF had changed its position and now the agreement will be good. “It seems that we have come close to the agreement. There is need to make the agreement last one,” he said. He said that no one will rectify things in Pakistan from abroad. “The economy will rise if we will make better decisions. It will happen only with the investment,” he maintained.