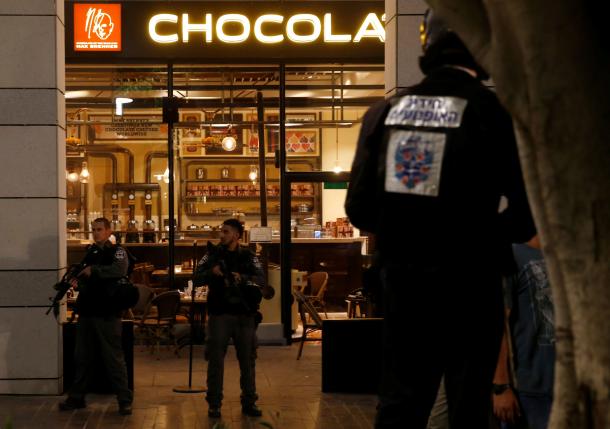 TEL AVIV - Two Palestinian gunmen killed four people at a popular shopping and restaurant area in Tel Aviv in an attack that sent diners, some clutching small children, running for their lives just outside Israel's Defence Ministry. Both gunmen, identified by police as Palestinians from a village near the city of Hebron in the Israeli-occupied West Bank, were apprehended, and one was wounded. Security footage showed the two, dressed in suits and ties and posing as customers at a restaurant, suddenly pull out automatic weapons and open fire, shooting one man point blank, as other diners fled. Police said the assailants killed four people in the 9:30 p.m. (1830 GMT) assault and that six were wounded. The attack, as families were enjoying a balmy evening out at the trendy Sarona complex, was one of the most serious in the country's business and entertainment capital since a wave of Palestinian violence erupted eight months ago. Israeli Prime Minister Benjamin Netanyahu, returning from a visit to Moscow, rushed directly to the Defence Ministry to assess the situation with senior ministers and security chiefs. He toured the scene later and described the attack as "cold-blooded murder." "We held a consultation about the series of offensive and defensive measures that we will implement to act against the grave phenomenon of shootings. They certainly challenge us, but we will provide an answer," Netanyahu told reporters. The U.S. State Department condemned the attack in "the strongest possible terms," saying in a statement: These cowardly attacks against innocent civilians can never be justified." A lull over the past several months in what had been near-daily stabbings and shootings made the attack just metres (yards) from the sprawling defence compound surprising and was likely to bring back a sense of insecurity to Israeli streets. "I was with the family, eating pizza. We heard the shots, we didn't know what was happening, and everybody got down on the floor. We managed to escape to a cellar," a woman, who gave her name only as Annette, told Israel's Channel 10 television. Security personnel who guard the Sarona complex fired back. In the past half year, Palestinian attacks have killed 32 Israelis and two visiting U.S. citizens. Israeli forces have shot dead at least 196 Palestinians, 134 of whom Israel has said were assailants. Others were killed in clashes and protests. Tensions over Jewish access to a volatile and contested Jerusalem holy site, revered by Muslims as Haram al-Sharif (Noble Sanctuary) and Jews as Temple Mount, have fuelled the violence. Israel says incitement in the Palestinian media and personal problems at home have been important factors spurring assailants, often teenagers, to carry out attacks. But Israeli officials also have pointed to efforts in recent months by the Palestinian Authority, which exercises limited self-rule in the West Bank, to curb the assaults. In a similar attack in Tel Aviv five months ago, an Israeli Arab killed two people on a main shopping street and the driver of a taxi he used to flee the scene. The assailant was killed a week later in a shootout with police at a hideout in his home village in northern Israel. -Reuters