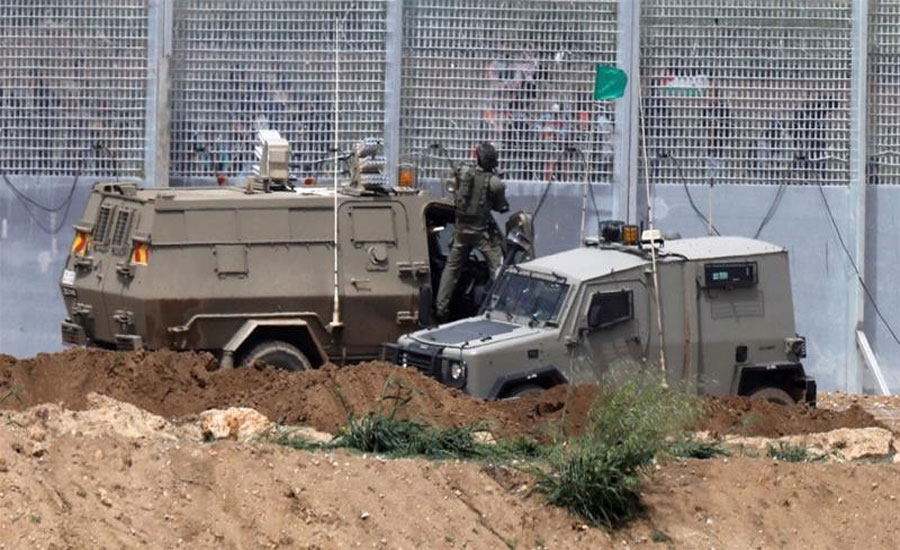 GAZA (Palestine)- A Palestinian man was martyred by Israeli army as the latter claimed the man crossed from Gaza into Israel overnight and shot at Israeli troops.

In return fire what the Israeli army claimed the Palestinian was dead and three Israeli soldiers wounded.

An Israeli tank also targeted a military outpost belonging to Hamas, which governs the Gaza Strip, during the incident, Israel's military said in a statement.

It added that an army officer had been moderately wounded and two soldiers lightly injured by the Palestinian's shooting in the area of the southern Gaza Strip.

The latest shooting comes as US senior adviser and President Donald Trump's son-in-law, Jared Kushner, is on a Middle Eastern tour to promote his peace plan.

There has been tension along the line dividing Gaza and Israel since regular protests and clashes erupted there in March 2018. At least 297 Palestinians have been killed in Gaza or the boundary area by Israeli fire since then, the majority during demonstrations. Seven Israelis have been killed.
The protests have declined in intensity recently after a truce brokered by United Nations officials and Egypt. Under the truce, Israel agreed to take steps to ease aspects of its blockade on Gaza but Palestinians have accused it of slowing the deal, adding that it has not taken enough measures to ease the crippling economic conditions in the coastal enclave. Palestinians have been calling for an end to Israel's 12-year blockade of the Gaza Strip, which has shattered the coastal enclave's economy and deprived its two million inhabitants of many basic amenities. Israel and Hamas have fought three wars since 2008.
SOURCE: NEWS AGENCIES