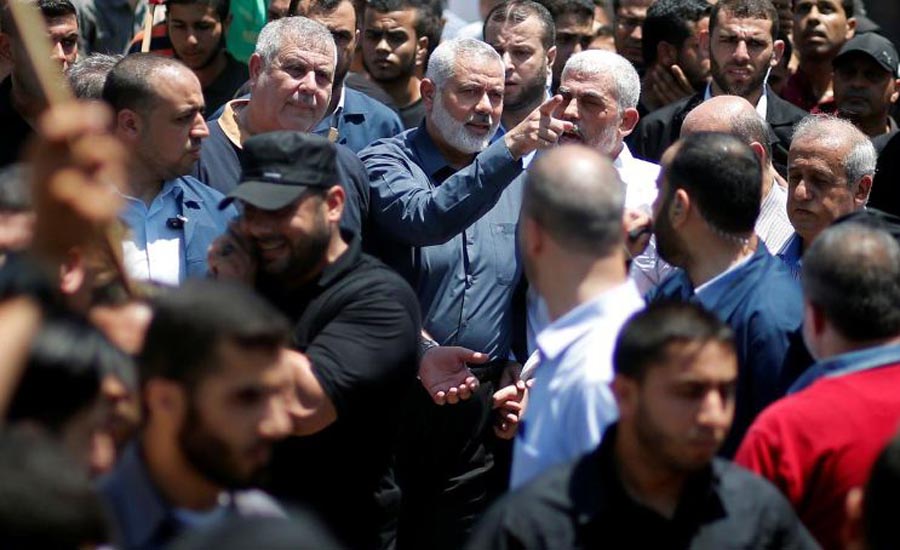 MANAMA (Reuters) - Palestinians poured scorn on the Trump administration’s much-touted peace plan for the Israeli-Palestinian conflict on Wednesday, saying its framework for a trade and investment boost ignored their political aspirations for statehood. Gulf states attending an international meeting in Bahrain, orchestrated by the plan’s architect, US President Donald Trump’s son-in-law Jared Kushner, gave it qualified support. But they also stressed that any peace settlement must be based on two-state solution. Kushner told reporters his team would release the plan’s political details, which remain secret, “when we’re ready”, adding: “We’ll see what happens”. He said a peace deal would happen when both sides are ready to say “yes”. He acknowledged that they may never get there. Neither the Israeli nor Palestinian governments are attending the meeting, which takes place amid a years-long stalemate in other international efforts to resolve a conflict that has lasted more than 70 years. Senior Palestine Liberation Organisation official Hanan Ashrawi, speaking in the West Bank city of Ramallah, said the Manama conference was “quite disingenuous”. “It is totally divorced from reality. The elephant in the room is the (Israeli) occupation itself,” she told a news conference. Several thousand Palestinians demonstrated in the Hamas-controlled Gaza Strip and burned posters of Trump and Israeli Prime Minister Benjamin Netanyahu. “No to the conference of treason, no to the conference of shame” read one banner. The chief of the Islamist Hamas, Ismail Haniyeh, criticised the plan as a ruse against the Palestinian people. “This money must not come at the expense of our enduring rights, or at the expense of Jerusalem or the right of return or at the expense of sovereignty and resistance,” he said. The foreign minister of Bahrain said the plan, nearly two years in the making, was an “opportunity not to be missed”. He reiterated the need for a two-state solution, which has underpinned every peace plan for decades, but Trump’s team has consistently refused to commit to it. “I think if we take this matter seriously it could be a very important game-changer,” Sheikh Khalid bin Ahmed al-Khalifa told Israeli public broadcaster Kan in English. But many Arab states, including Lebanon, stayed away from the event while others including Jordan and Egypt, the two Arab nations that have reached peace agreements with Israel, sent deputy ministers. The Lebanese government and parliament both oppose the U.S. plan, Prime Minister Saad al-Hariri said on Wednesday.

Washington hopes the wealthy Gulf states will bankroll the plan, which expects donor nations and investors to contribute $50 billion (£39 billion) to Palestinian and neighbouring Arab state economies. Saudi Finance Minister Mohammed al-Jadaan said the kingdom would support whatever brings prosperity to the region but that it was important that it was driven by the private sector. UAE Minister of State for Financial Affairs Obaid Humaid al-Tayer said: “We should give this initiative a chance”. Riyadh said on the eve of the conference that any peace deal should be based on a Saudi-led Arab peace initiative that calls for a Palestinian state drawn along borders which predate Israel’s capture of territory in the 1967 Middle East war. It also envisages a capital in East Jerusalem and refugees’ right of return - points rejected by Israel. It is not clear whether the Trump team plans to abandon the two-state solution, which is backed by the United Nations and most countries. Kushner has said the plan would not adhere to the Arab initiative. Any solution must settle long-standing issues such as the status of Jerusalem, mutually agreed borders, Israel’s security concerns, Palestinian demands for statehood, and the fate of Israel’s settlements and military presence in territory where Palestinians want to build that state. Palestinian leaders are refusing to engage with the White House, accusing it of pro-Israel bias. Breaking with the international consensus, Trump in 2017 recognised Jerusalem as Israel’s capital, infuriating the Palestinians and other Arabs.

Former British Prime Minister Tony Blair also emphasised the need for a two-state solution and said peace required both political and economic tracks. “It’s absolutely foolish to believe you can have economics without sound politics, but it’s likewise completely futile to think politics will work without economics buttressing it,” he told the gathering. International Monetary Fund managing director, Christine Lagarde, said generating economic growth in conflict-riven countries can be a struggle. The IMF puts unemployment at 30% in the West Bank and 50% in Gaza, which has suffered years of Israeli and Egyptian blockades and recent foreign aid cuts and sanctions by the Palestinian Authority, Hamas’ rival in the Israeli-occupied West Bank. “Gaza right now is feeling a lot of pain because of bad leadership and the sanctions that have been imposed on them because of it,” Kushner said. “So the question that (Hamas)leadership has to ask themselves is...do they hate their neighbour in Israel more than they love their citizens and their people?” The 179 proposed infrastructure and business projects in the plan include a $5 billion transportation corridor to connect the West Bank and Gaza, which has been floated before and stalled for lack of underlying political or security agreements. Palestinian businessman Ashraf Jabari, chairman of the Palestinian Business Network, told the gathering it was difficult to build an economy with a “siege and unstable situation”. “Frankly, we demand an independent Palestinian state on the territories occupied by Israel in 1967,” said the businessman from Hebron, who has co-founded a trade group to boost business between Palestinians and Israeli settlers.