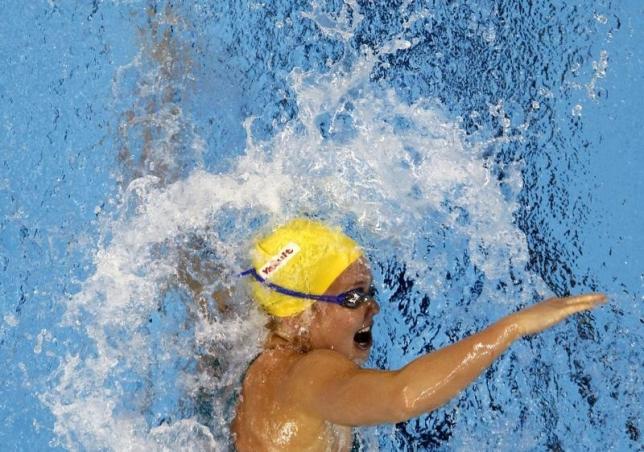 SYDNEY - Olympic relay gold medallist Kylie Palmer has been reprimanded for a 2013 doping violation, Swimming Australia said on Wednesday, clearing the way for her to compete at next year's Rio Games. World governing body FINA had initially cleared Palmer in 2013 after the "low levels of a prohibited substance" found in her in-competition sample at the Barcelona world championships did not show up in other tests conducted around the same time. In February this year, however, the World Anti-Doping Agency (WADA) obtained details of the case and subsequently asked the Court of Arbitration of Sport to order FINA to treat the case as an anti-doping violation. Palmer then voluntarily withdrew from the Australian team for last month's world championships in Kazan and accepted a temporary suspension. FINA's doping panel ruled on Tuesday she should receive only a warning and reprimand, with her results and prize money on the date of the test in 2013 annulled, Swimming Australia said. The world governing body did not strip her of the 4x200m freestyle silver medal she won at Barcelona. "Swimming Australia fully supported the process once the matter came before the FINA Doping Tribunal and accepts the findings," the governing body in Australia said in a statement. "Palmer voluntarily accepted a provisional suspension until the matter was determined by the FINA Doping Panel. "As such she is now able to compete whenever she decides to return." Swimming Australia had previously said it was concerned at the two-year delay between the test and notification. Palmer, who strongly denies knowingly ingesting any banned substances, was a 4x200m freestyle relay champion at the 2008 Beijing Olympics and a silver medallist in the same event four years later in London. "I am very pleased that the decision of the panel means that I can return to competitive swimming immediately," she said in a statement. "My number one goal is to represent Australia at the Rio Olympics in 2016 and I cannot wait to get back on track to achieving that dream. "I sincerely hope that this process is now over. It has been a distressing few months since I was first notified of the positive test back in April 2015," added Palmer. The case had denied her the chance to swim for Australia at the world championships in Kazan and that was something she could never get back. "I cannot get back that opportunity to represent my country internationally but I am now looking to the future," she said. -Reuters