ISLAMABAD (92 News) – The National Assembly (NA) session adjourned due to the pandemonium by the opposition members when they were not allowed to speech on Thursday. Ruckus marred during the proceedings of the NA over the speaker’s refusal to the speech of PML-N’s Ahsan Iqbal. During the pandemonium, the outraged opposition members gathered in front of the speaker’s dais and hurled accusations at each other. Later, the NA session was adjourned for indefinite period. NA Deputy Speaker Qasim Suri strongly responded to the matter and said, “The House is not for you all to deliver speeches and go home.” I will not take dictation from anyone to run this house,” he warned. Earlier, while speaking outside the parliament, PML-N leader Khawaja Asif slammed the arrest of Khursheed Shah, elaborating that the PPP leader was arrested during the assembly session yesterday. “It seems like the loyalty to party if affecting the oath to office of the National Assembly speaker,” the PML-N leader said. He also warned that political tensions could escalate sharply. 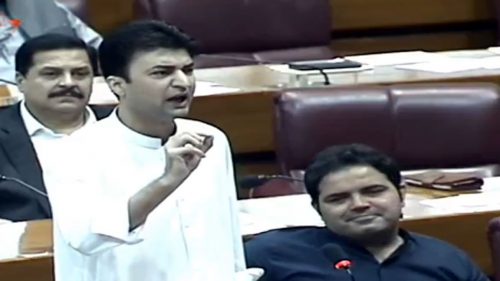 Responding to opposition leaders and lashing out at the political rivals, Minister for Communications Murad Saeed highlighted their corrupt practices in the previous governments. “Cases of Falooda and Pakora walas are being surfaced. The National Accountability Bureau (NAB) is an independent institution and functioning as per its law,” Murad Saeed mentioned. Referring to the arrest of Khursheed Shah, the minister said that the chairman of the bureau was appointed by the previous government itself with the consultation of PPP. He recalled that it was the PML-N and the PPP, which had accused each other of corruption, and said: “The PML-N once talked of dragging Zardari and mocked Khurshid Shah as a ‘meter reader’.” Murad Saeed also suggested that instead of making hue and cry on the arrest of their leaders, the opposition parties should raise the voice for the rights of Kashmiris. “We should give a message that the entire nation and the parliament stand shoulder-to-shoulder with their Kashmiri brethren.” Commenting on the Kashmir issue, Murad Saaed said that it was the first time that Hindutva face of India has been uncovered by Pakistan at the international level. He said the world today has been supporting Pakistan’s stance on the Kashmir issue.