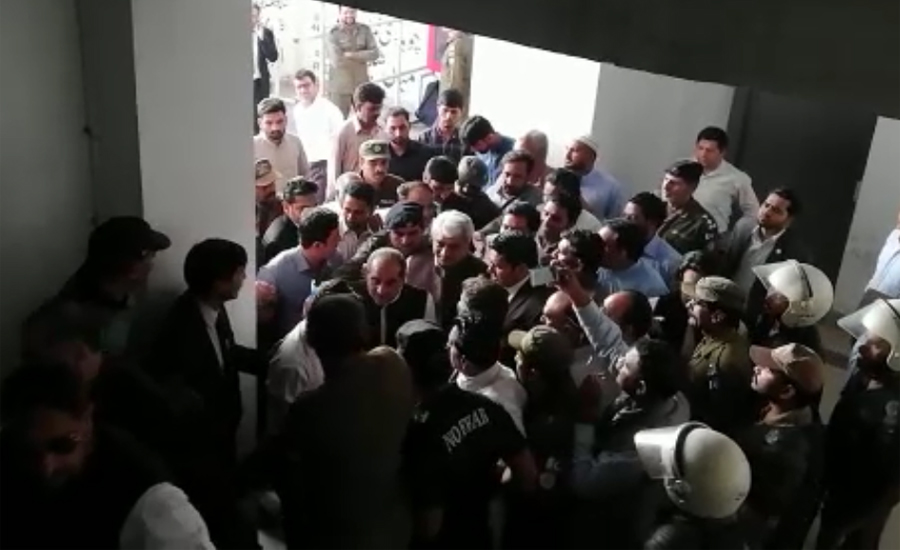 LAHORE (92 News) – Accountability Court Judge Najamul Hassan extended the judicial remand of the Khawaja brothers till May 2 in the Paragon Housing scam. The PML-N workers scuffled with the police outside the court. However, the police foiled their attempt to enter the court premises. On April 4, the court had extended their judicial remand for 14 days. Talking to the media after the hearing, Khawaja Saad Rafique said that incompetent people are at the helm in Pakistan. “The rulers will make the people weep more. We had left billions of rupees and it is beyond understanding that where the amount had gone,” he maintained. He demanded that Foreign Minister Asad Umar should resign over his irresponsible statement. Earlier on March 19, Accountability Court Judge Najamul Hassan had extended the judicial remand of PML-N leader Khawaja Saad Rafique and Khawaja Salman Rafique for 15 days. The court ordered to produce them again on April 4. Khawaja Salman Rafique appeared before the court. Moreover, the court has also extended the judicial remand of Ahad Cheema, an accused in the LDA City case, till April 4. NAB allegations Following their arrests, the NAB Lahore had issued a press release and stated that “Accused Saad Rafique along with his benamidaar wife Ghazala Saad Rafique, brother Salman Rafique in association with Qaiser Amin Butt and Nadeem Zia established a housing project in the name of Air Avenue which was converted into a new housing project namely M/S Paragon City Pvt Limited. Record shows that M/S Paragon City is an illegal society.” “Accused in collusion, connivance and collaboration of Qaiser Amin Butt and Nadeem Zia cheated the members of public at large and obtained illegal pecuniary benefits from the funds of said illegal housing project,” it added. Further, it stated, “Accused is operating this illegal housing project through his associates/ co-accused persons who are collecting deposits from general public despite clear directions from LDA that this project is unapproved. Accused has been and is continuously obtaining illegal/ illegitimate funds/ benefits from said project as he obtained 40 kanal plots in his own name and the name of his brother Salman Rafique.” The press release continued, “Accused by misusing his official position continued the expansion and marketing of illegal housing project and also obtained undue benefits in the form of sale of numbers of commercial plots worth billions of rupees which were actually not owned by M/S Paragon City. Thus the buyers have been cheated through this action of corruption and corrupt practices.”