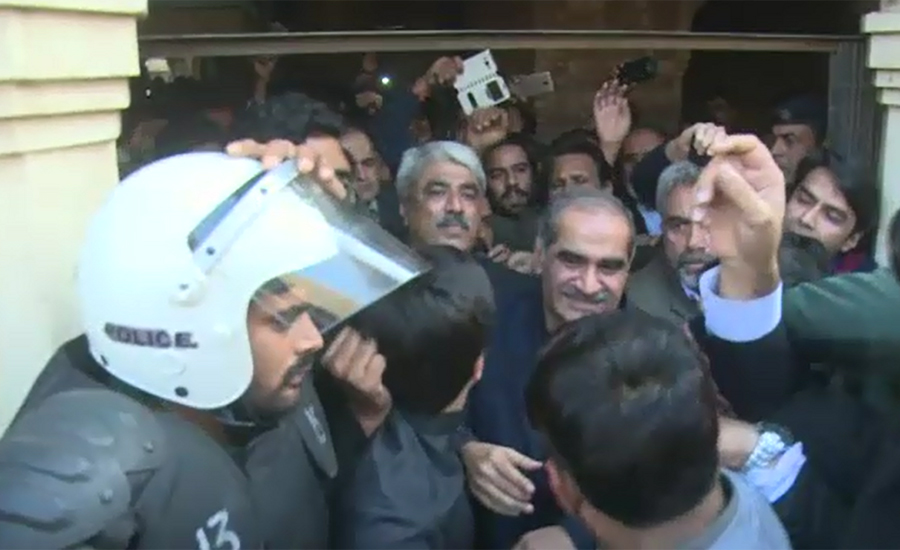 LAHORE (92 News) – Accountability Court Judge Najamul Hassan on Saturday sent PML-N leaders Khawaja Saad, Salman Rafique to jail on judicial remand for 14 days in the Paragon Housing scandal. They will again be produced in court on February 16. After the hearing, Khawaja Saad Rafique said that the NAB had no question to ask them. “We had already answered to the questioned put to us,” he said. The PML-N leader said that Prime Minister Imran Khan had gone personal over the production order. Stringent security arrangements had been made on the occasion. Only a few workers managed to reach the court. The NAB had taken Khawaja brothers into custody last month after rejection of their petition to obtain pre-arrest bail. Subsequently, the NAB had also launched a probe against them under the suspicion of assets beyond known income.

Following their arrests, the NAB Lahore had issued a press release and stated that “Accused Saad Rafique along with his benamidaar wife Ghazala Saad Rafique, brother Salman Rafique in association with Qaiser Amin Butt and Nadeem Zia established a housing project in the name of Air Avenue which was converted into a new housing project namely M/S Paragon City Pvt Limited. Record shows that M/S Paragon City is an illegal society.” “Accused in collusion, connivance and collaboration of Qaiser Amin Butt and Nadeem Zia cheated the members of public at large and obtained illegal pecuniary benefits from the funds of said illegal housing project,” it added. Further, it stated, “Accused is operating this illegal housing project through his associates/ co-accused persons who are collecting deposits from general public despite clear directions from LDA that this project is unapproved.” “Accused has been and is continuously obtaining illegal/ illegitimate funds/ benefits from said project as he obtained 40 kanal plots in his own name and the name of his brother Salman Rafique.” The press release continued, “Accused by misusing his official position continued the expansion and marketing of illegal housing project and also obtained undue benefits in the form of sale of numbers of commercial plots worth billions of rupees which were actually not owned by M/S Paragon City. Thus the buyers have been cheated through this action of corruption and corrupt practices.”