Parahi's gamble to ditch NRL pays off with Rio call 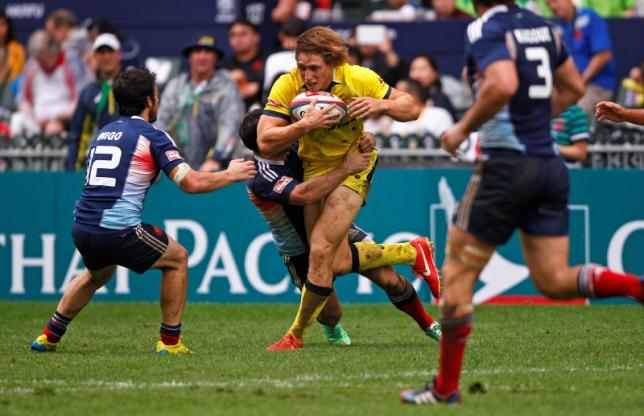 Parahi's gamble to ditch NRL pays off with Rio call

RIO DE JANEIRO - Jesse Parahi's decision to ditch rugby league and return to sevens paid dividends on Thursday when the forward was named in Australia's squad for next month's Rio de Janeiro Olympics. The 27-year-old helped Australia advance to Rio last year when they clinched the Oceania qualification tournament in Auckland before he switched to the National Rugby League' Wests Tigers. However, he cut short his contract with the Tigers in April, after a succession of injuries restricted his playing time, in a final attempt to make the "Thunderbolts" team for Rio. "I'm over the moon to be on the team," he said in a statement on Thursday after being named at a ceremony in Sydney. "It was a bitter pill to swallow knowing I'd given up the dream of playing at the Olympics. "In the end, however, it has helped me get into this team as I was able to work on some of the weaker parts of my game before returning, so everything happens for a reason I guess." None of the Super Rugby or Wallabies players who had attempted to make the squad were selected by coach Andy Friend, with Nick Cummins and Henry Speight losing the race against the clock to overcome injury. Tom Cusack (wrist) and Nick Malouf (knee) overcame injuries to make the final cut, with the 23-year-old Cusack spending much of his rehabilitation time scouting their opposition at Rio, where they face heavyweights South Africa, France and Spain in Pool B. "My recovery has all gone perfectly and this will be my first major tournament coming back from that," Cusack said. "France have been getting better and better throughout the year with a host of handy players in their squad, Spain had to beat some tough teams to get the final spot at the Games and South Africa have been fantastic all year and they finished second in the overall World Series." There were no surprises in womens' coach Tim Walsh's squad for Rio, with the World Sevens Series champions at full strength after Gemma Etheridge recovered from knee surgery in time. The side will be co-captained by Sharni Williams and Shannon Parry. "It's so surreal for all of us and I don't think it will really sink in that were going to be Olympians," said Williams. "Our goal is to go to Rio and win gold and it is something we speak about every day. The World Series win has certainly given us the confidence to achieve that goal." Women's squad: Shannon Parry, Sharni Williams, Nicole Beck, Gemma Etheridge, Emma Tonegato, Evania Pelite, Charlotte Caslick, Chloe Dalton, Amy Turner, Alicia Quirk, Emilee Cherry, Ellia Green Men's squad: Nick Malouf, Jesse Parahi, Henry Hutchison, Lewis Holland, James Stannard, Con Foley, Cameron Clark, Pat McCutcheon, Ed Jenkins, Allan Fa'alava'au, John Porch, Tom Cusack -Reuters