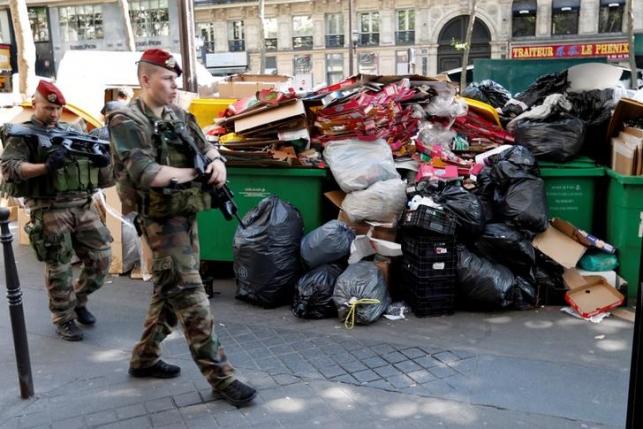 PARIS - The French authorities sent in private rubbish collection trucks to clear piles of rotting garbage from Paris streets on Friday and told striking public sector workers they would not be allowed to disrupt Europe's soccer championship. The eyes of the continent are on France as the Euro 2016 tournament kicks off later in the day, with 1.5 million foreign fans expected to join at least one million French supporters for the month-long sports festival. "All the rubbish will be cleared up, starting now, today," said Paris Mayor Anne Hidalgo, adding that about 50 trucks had been dispatched overnight and 30 more on Friday morning to rid the city of rubbish piling up as waste treatment workers strike. "It will take a few days obviously." Wary of damage to France's international image, Transport Minister Alain Vidalies said train drivers would be forced to ensure public transport for fans if needed. He and Hidalgo were speaking hours before the opening match of a tournament that was supposed to showcase the ability of a country still smarting from deadly militant attacks last November to handle a major international event smoothly. "If requisitioning is required ... we will do it," said Vidalies. "There will be no more negotiating. There's no longer any reason to continue the strike if it's not for political reasons." The disputes were sparked by government plans to make hiring and firing easier with a revamp of labor law, which Prime Minister Manuel Valls has repeatedly said he will not withdraw. Public-sector waste treatment staff who have been on strike for days have vowed to continue the protest into next week and workers at the state-owned SNCF railways were on strike for a tenth day on Friday. Air France pilots are due to start a separate four-day stoppage on Saturday in protest at pay cuts. The airline said about 80 percent of flights would go ahead. Vidalies said the government would not tolerate any form of illicit protest such as occupation of railway tracks, a ploy used occasionally in recent days to bring transport to a halt. One big concern was threats by some labor unions to disrupt train links between Paris and the suburban 80,000-capacity Stade de France stadium where France plays Romania in the tournament opener on Friday night. "This is an action against France and the French people," the minister told Europe 1 radio. Asked if images broadcast worldwide of rotting rubbish would also compromise Paris's bid to host the 2024 Olympics, Vidalies quipped: "I didn't see any hordes of rats on my way here." The head of the communist-rooted CGT union spearheading the strikes, Philippe Martinez, said Labour Minister Myriam El Khomri had invited him to meet her next Friday, June 17, three days after a planned national protest day on Tuesday against the labor reform. "That's what we have been demanding for months. It's high time," Martinez told Reuters. "It's better if we talk." -Reuters