ISLAMABAD (92 News) – The Parliamentary Committee has agreed to Naveed Jan Baloch, a name proposed by Prime Minister Imran Khan, for the Election Commission of Pakistan member from Balochistan. Sources said that the person nominated by the opposition will be inducted from Sindh. The Parliamentary Committee will again meet on Tuesday. Parliamentary Committee chairperson Shireen Mazari said that the opposition and the government had reached consensus. “The names of ECP members will be announced before the National Assembly session on Wednesday,” she said. On November 30, Opposition Leader in the National Assembly Shehbaz Sharif has written a letter to Prime Minister Imran Khan, National Assembly Speaker Asad Qaisar and Senate Chairman Sadiq Sanjrani, proposing three names – Nasir Mahmood Khosa, Jalil Abbas Jillani and Ikhlaq Ahmed Tarar – for the appointment of the chief election commissioner. 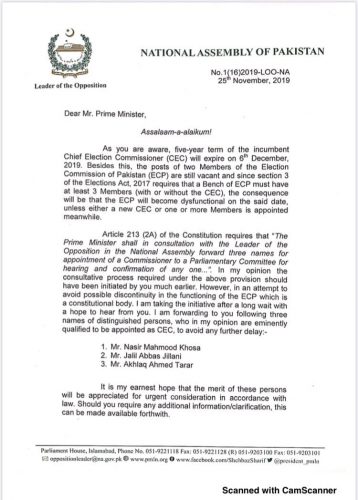 According to the letter, Shehbaz Sharif said that the constitutional tenure of the chief election commissioner is expiring on December 6. “The seats of two members are also vacant. Under the Election Act 2007, the ECP bench comprises of at least three members. The ECP will be inactive if a member and more members were not appointed,” he said. 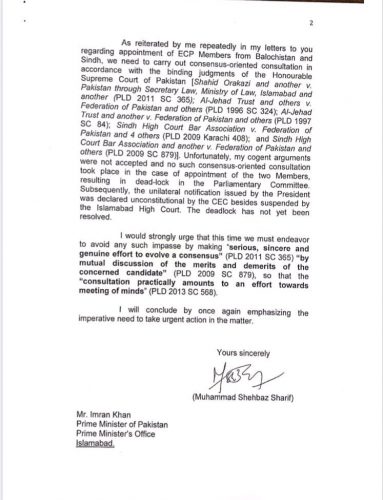 Shehbaz Sharif said that it was demand of 213(2A) that the prime minister should consult the opposition leader. “Under the rule, the prime minister sends a name for appointment of the chief election commissioner to the parliamentary committee after consulting the opposition leader,” he said in the letter. He asked the prime minister to consider the names of these people immediately as per law. On the other hand, Shehbaz Sharif has proposed three each names for the appointment of ECP members in Sindh and Balochistan. He proposed the names of Nisar Durrani, Justice (retd) Abdul Rasool Memon and Aurangzeb Haq for Sindh, while Shah Mahmood Jatoi advocate, former advocate general Rauf Atta and Raheela Durrani have been recommended for Balochistan.