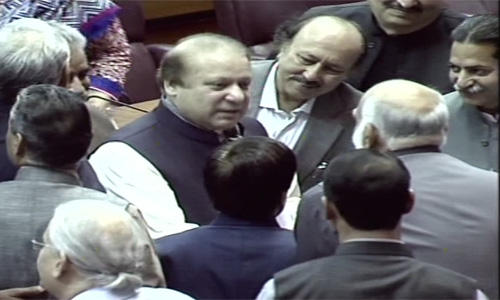 ISLAMABAD (92 News) – The parliament’s joint session on Friday unanimously approved the resolution on the Yemen issue. The resolution emphasized the mediatory role of Pakistan in the Yemen issue. It stated that Pakistan will not become a party in the Yemen civil war. "The Yemen situation could turn into sectarianism and cause crisis in the region." However, Prime Minister Nawaz Sharif did not deliver the policy statement. The joint session has been postponed for an indefinite period. Federal Finance Minister Ishaq Dar asked the United Nations and the Oragnistaion of the Islamic Countries (OIC) to find a peaceful resolution to the Yemen issue. He said that Pakistan will be on the frontline to defend the Haramain Shirafain. Ishaq Dar thanked China for cooperating in the evacuation of the stranded Pakistanis.