Parma back in Serie A after third successive promotion 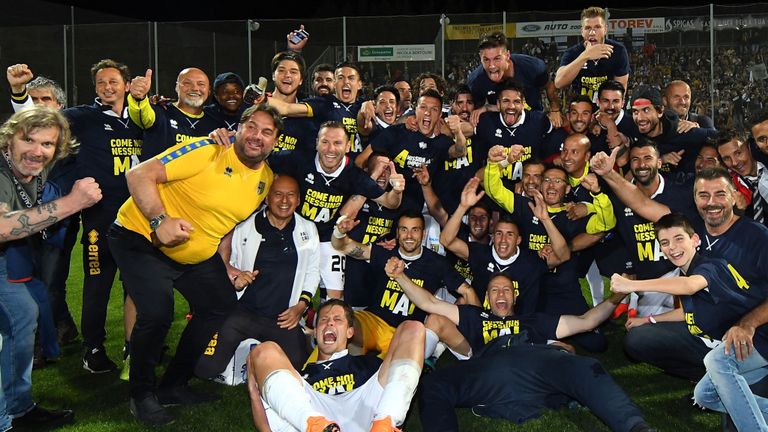 Parma back in Serie A after third successive promotion

ROME (Reuters) - Twice UEFA Cup winners Parma will return to the Italian top flight next season after a 2-0 win at Spezia in their final Serie B fixture earned the club an unprecedented third successive promotion. The club, which also won the European Cup Winners’ Cup and three Coppa Italias during their heyday of the 1990s and early 2000s, was relegated to Serie D after going bankrupt in 2015. A reconstituted club easily secured promotion from Serie D in 2015-16 and won the Serie C promotion playoff the following year to move into the second flight. The victory over Spezia, secured courtesy of goals from Fabio Ceravolo and Amato Ciciretti, combined with Frosinone’s 2-2 draw against Foggia ensured they finished second in Serie B behind Empoli and will return to the top division. The return was particularly emotional for club captain Alessandro Lucarelli, who stuck with the Parma through their journey down the divisions and deferred his retirement to complete the trip back up. “I made a promise. I said I’d take Parma back to Serie A. I kept my promise,” the tearful 41-year-old defender told Sky Sport Italia. “This is a journey we started three years ago in front of these amazing fans. We had difficult moments, we always got back on our feet. They never gave up and I am proud to have been their captain. “Now I can stop. I don’t know, we’ll see. I just need to celebrate right now.” Frosinone were leading Foggia 2-1 with a minute remaining but conceded an equaliser to miss out on automatic promotion due to an inferior head-to-head record against Parma. That led to dramatic scenes at Spezia as the news came through from Lazio. “It can’t be real, it’s impossible,” Lucarelli added. “Nobody could’ve imagined a finale like this, not even in my wildest dreams. The others were celebrating, then we heard a huge cheer from the stands. I don’t know what happened.” Frosinone, who spent one season in Serie A two years ago, could still return to the top flight through the promotion playoffs, which also feature Venezia, Perugia, Bari, Cittadella and Palermo.