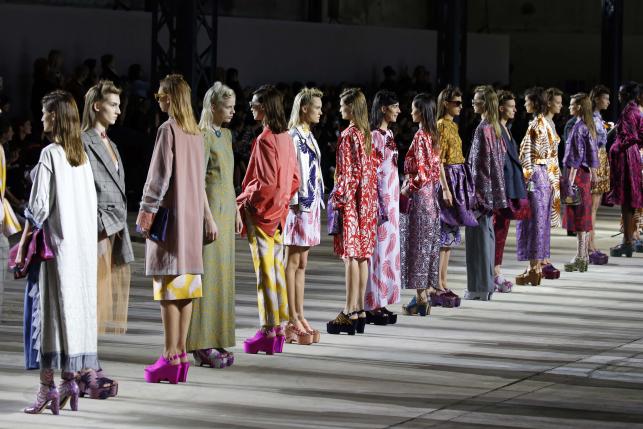 PARIS - Belgian designer Dries Van Noten delivered a bold serving of his usual colorful and patterned creations at Paris Fashion Week on Wednesday, presenting richly-brocaded overcoats and dresses for women's wardrobes next spring. Staged in an industrial hangar, the Paris Fashion Week show featured a string quartet as models showcased Van Noten's embroidered coats, ankle-length trousers, skirts and tops in shades of pink, purple, mustard and aqua marine. Patterns were ubiquitous in the spring/summer 2016 collection, even on models' arms and legs in the form of stockings and gloves that recalled henna tattoos. Van Noten said the gloves were a nod to the fashion of the 1940s, also reflected in vintage-like sunglasses and sturdy bras, worn under or over transparent tops. The clothes, competed with bulky block heels, were designed for a woman who is "flamboyant", Van Noten said. "For me that was the starting word of this collection, that she enjoys life, she wears and she dares," he said backstage. "The idea was to do it sophisticated and raw at the same time; so bicolor prints, or two tone prints, which when you clash them together ... make an even bigger shock than when you have multicolored things." Paris Fashion Week runs until Oct. 7. - REUTERS