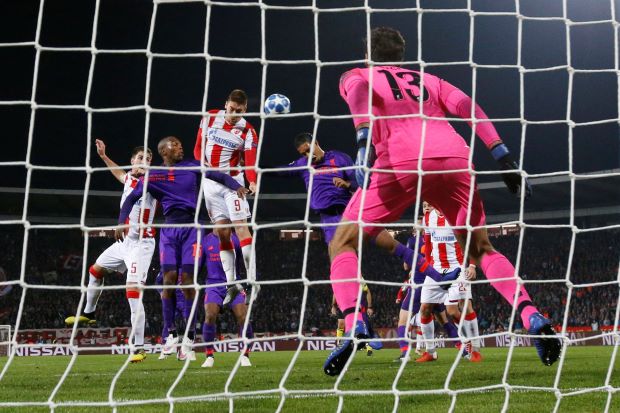 BELGRADE (Reuters) - Red Star Belgrade wound back the clock to their European heyday as two goals from towering striker Milan Pavkov helped the Serbian side to a memorable 2-0 Champions League home victory over a subdued Liverpool in Group C on Tuesday. It was the Serbian side’s first-ever win in the Champions League group stages on their maiden campaign in the present format of Europe’s elite club competition and their most memorable night since they won the 1991 European Cup. It was also thoroughly deserved after a spirited performance from the home side in the cauldron of Red Star’s Rajko Mitic stadium. The result left Liverpool facing a tricky path to the knockout stages, although they still have their fate in their own hands. Liverpool were provisionally top of the group on six points from four games, with second-placed Napoli (five points) at home to third-placed Paris St Germain (four points) later on Tuesday. Red Star also have four points after they bounced back from successive drubbings by Liverpool and Paris St Germain following their opening goalless home draw with Napoli. Liverpool are away to Paris St Germain in their next match before a potentially decisive clash with Napoli at Anfield. Visibly disappointed after what could prove to be a costly setback, Liverpool manager Juergen Klopp conceded his side played well below par in a cracking atmosphere. “It was a good football atmosphere, not one where it would have been impossible to perform, to be honest,” he told a news conference. “We had our moments but we never really clicked or got back into the game after falling two goals behind. We gave them too many set pieces, they were more aggressive and deserved to win.”

Red Star’s fervent fans were taken down memory lane before kick off, as several of their stalwarts who were part of the team that beat Liverpool 4-2 on aggregate in the 1973-74 European Cup were paraded by the touchline. Pavkov, a surprise starter up front as Red Star’s third-choice striker, gave the home side a 22nd-minute lead when he headed home from the edge of the six-yard box after a Marko Marin corner from the right. It was no more than Red Star deserved after the opening 20 minutes, with centre back Vujadin Savic firing over early on before El Fardou Ben Nabouhane forced Liverpool keeper Alisson Becker to palm his low drive from 25 metres around the post. Alisson could do nothing, however, as Marin swung in the corner and Pavkov rose above his markers to spark wild celebrations among the fervent 55,000 home crowd. The atmosphere reached fever pitch seven minutes later as Pavkov doubled the home side’s advantage, rifling a screaming shot from 25 metres into the right corner of the net with Alisson well beaten. Liverpool, whose midfield struggled against their more aggressive opponents, lost possession on the halfway line and Pavkov shrugged off Georginio Wijnaldum to find the time and space to unleash an unstoppable shot. Mohamed Salah fired over the bar shortly afterwards to sum up a poor first half for Liverpool, with Daniel Sturridge also missing an early chance for the visitors when he skied his volley from close range. Salah missed two good chances within a minute for Liverpool midway through the second half, forcing a good save from Red Star keeper Milan Borjan before he shaved the outside of the post with a shot from the edge of the penalty box. The outstanding Borjan again denied Salah from close range in the 82nd minute as Liverpool piled on the pressure but the visitors could not find a way through Red Star’s packed and well-organised defence. “This is a fantastic win for our club and our nation, we have now raised the bar and have to look ways to keep improving,” said Red Star’s delighted coach Vladan Milojevic. “We’ve beaten a Champions League contender and I am very proud of my players.”