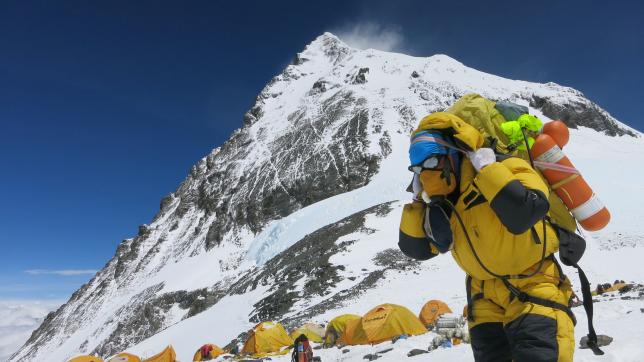 KATHMANDU/NEW DELHI - On his way down from the top of Mount Everest, Indian mountaineer Nava Kumar Phukon saw the woman sway from side to side - a classic sign of severe mountain sickness - as snow and fog reduced visibility to less than 10 feet (3 metres). Phukon's sherpa guide later told him the woman was 34-year old Australian Maria Strydom, who died last Saturday on the high slopes of Everest after making a failed push for the summit. "The sherpa who was trying to help her told me: 'She is going to die'," Phukon said after returning to Kathmandu from his own exhausting but successful summit bid. "I did not have any extra oxygen, clothes or food, not even water to offer to her," Phukon said. "I was so weak myself." Reuters could not independently confirm that it was the same woman, although both the sherpa guides worked for the same agency Seven Summit Treks and knew each other. Three deaths in as many days on the world's tallest mountain have renewed safety concerns after eager climbers flocked to the 8,850-metre (29,035-foot) summit for the first time since last year when an avalanche triggered by a magnitude-7.8 earthquake struck Base Camp, and all expeditions ground to a halt. A Dutch national, also with Seven Summit Treks, died last Friday in the notorious 'death zone' where the air is so thin that only the fittest can survive without bottled oxygen, while an Indian perished on Sunday due to exhaustion. Two other Indian climbers have been missing since Saturday, and are feared dead. Officials from Seven Summit Treks said 13 sherpas bringing Strydom's body down the mountain had encountered heavy snowfall at about 7,700 metres on Tuesday. When the weather improves they will resume the rescue, and her body will be flown to Kathmandu later this week, before the spring climbing season shuts with the onset of the monsoon. Deaths are not uncommon on Everest and the number of fatalities this year is close to average. But experts say the lure of reaching the highest point on Earth is increasingly attracting less experienced climbers served by agencies hungry for business. "Climbers are careless and confused about their strength and preparedness," said 30-year old Indian Ratnesh Pandey after summiting Everest on Saturday, without naming anyone. He said temperatures plummeted to minus 30 degrees Celsius (minus 22 Fahrenheit) near the top, while fierce winds closed many of the "weather windows" in the upper reaches, making this year's journey particularly tough. EXPONENTIAL GROWTH Scaling Everest is far from the world's most treacherous climb from a technical perspective. Mountaineering expert Alan Arnette estimates deaths at about 3 percent of attempts, against one in four on Annapurna, a Nepalese massif with its main peak surpassing 8,000 metres. But less skilled climbers keen to conquer the highest points on each of the world's continents often fail to appreciate how much more difficult Everest is than the other six, people in the climbing community say. Competition among low-cost local companies chasing a business that has boomed in recent years and is no longer dominated by international outfits has meanwhile undermined safety standards, they say. Some companies, charging around $30,000 a climb, or half that of high-end firms, are known to have sent relatively inexperienced climbers up the mountain without medically trained guides. "There is this exponential growth in organisations offering guiding services on Everest and because there are so few internationally qualified guides in Nepal, it means the companies are engaging less and less in skilled workers," said veteran climber Andrew Lock, the first Australian to lead a commercial expedition up Everest. Climbing is big business in Nepal, earning the government $3.1 million from 289 Everest permit fees this year. Critics accuse Kathmandu of failing to enforce rules requiring past experience of high climbs, but Tourism Department official Bishnu Regmi said the government was committed to safety. Arnold Coster, who led the expedition for Seven Summit Treks, said his agency was as prepared as any. He said he had personally selected climbers, and that Strydom and her husband Robert Gropel had three experienced sherpas between them. His team tried their best to evacuate Strydom when she got into difficulty, he said, but her condition deteriorated fatally before she reached a helicopter evacuation point. An extra sherpa was sent up to help Dutchman Eric Ary Arnold when he complained of weakness but he died later that day. "As far as I am concerned, we were one of the stronger teams on the mountain. It proves how unpredictable this sport is," Coster told Reuters by telephone from Base Camp. He acknowledged that the industry needed better regulation. "People can just sign up like it's tourism," he said. "There are a lot of people who still have a valid permit from 2015 and didn't show up this year. I think next year is going to be extremely busy." -Reuters