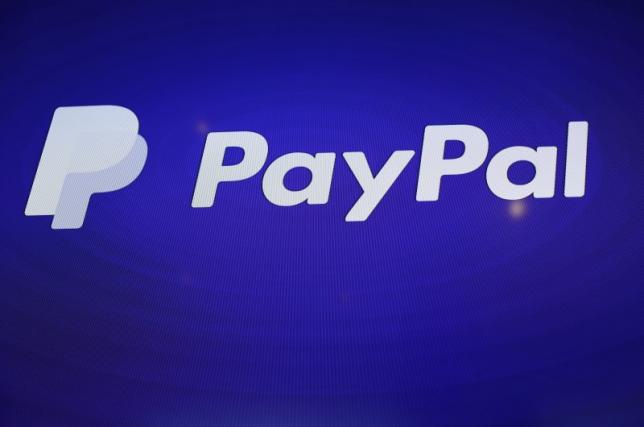 PayPal said it expects 2016 full-year earnings of $1.09 to $1.14 per share, and revenue growth of 16-19 percent on a currency neutral basis. It expects currency fluctuations to impact net revenue by 3 percentage points during the year.

Shares of PayPal, which completed its spin-off from eBay Inc in July, rose 6.4 percent to $33.66 in extended trade.

PayPal acquired more customers in the fourth quarter than any quarter in the company's history, Chief Executive Officer Dan Schulman said on an earnings conference call.

"It's becoming increasingly evident that payments is a hard business to crack," he said. "While many others are attempting to play in this space, PayPal continues to gain market share."

PayPal said its active account base rose by 6.6 million in the fourth quarter compared with the third quarter, and that it ended the year with 179 million active customer accounts.

That was more than the 177.3 million accounts analysts on average had estimated, according to research firm FactSet StreetAccount.

BTIG analyst Mark Palmer said the company's share buyback program was a reminder of the strength of its free cash flow. PayPal ended the year with $5.7 billion in cash reserves.

The company said it processed 450 payments per second on Cyber Monday, the highest in its history in 2015.

Schulman said the company will continue to look for ways to monetize its peer-to-peer payment application Venmo, that is popular with younger consumers. In 2015, Venmo more than tripled its growth rate and processed $7.5 billion in payments.

PayPal also plans to expand its mobile wallet One Touch to 100 new countries in the next six months. One Touch, which is currently available in 23 countries, allows online shoppers to pay for purchases without re-entering payment information every time they shop online.