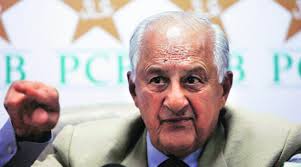 GUJRANWALA (92 News) – Chairman Pakistan Cricket Board (PCB) Shahyar Khan has on Sunday said that people wants to see cricket between Pakistan and India but the Indian government is not allowing. Talking to media at the Inter-Region Under 19 cricket match, he said that the Board of Control for Cricket in India (BCCI) has not yet replied to Pakistan’s proposal but the PCB is still working to resume cricket with India. Shaharyar Khan said that the success graph of Saeed Ajmal has dropped down since his change of bowling action. He said that top players of Sri Lanka and West Indies have been signed for Pakistan Super League, adding that they are signing more players. The PCB chairman said that Muhammad Amir is playing domestic cricket for the last six months after the International Cricket Council (ICC) pardoned him. “The selection committee will decide to take him in the team,” he said.