LORALAI (92 News) – Interior Minister Chaudhry Nisar Ali Khan has said that the people creating chaos in Pakistan are funded by the enemies. Addressing the 57th passing-out parade of FC Balochistan in Loralai on Saturday, he vowed to make Balochistan a hub of peace. He said that the Jawans' sacrifices would not go waste. “Peace has been established in Balochistan due to their sacrifices. Saboteurs are being funded by enemies. All terrorists will be eliminated,” he maintained. The minister said that Balochistan is rich in natural resources and the world is looking at it. “Peace will be established in the province. Jawans have rendered immortal sacrifices,” he added. The Jawans also displayed skills to deal with any challenge. A women contingent also displayed the professional skills. Ch Nisar appreciated the passion of the Jawans and awarded honorary shields to them. 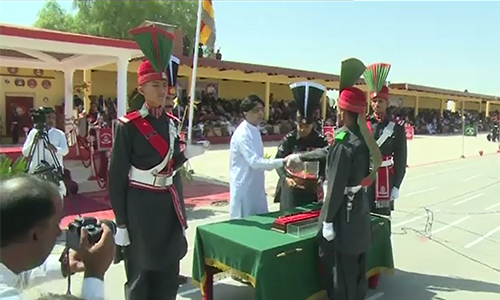 Later addressing a press conference with Balochistan Chief Minister Abdul Malik in Quetta, Ch Nisar said that Imran Khan’s speech contained nothing except abuses. “The MQM is not a terrorist organization,” he added. He said that the strong relations between political and military leadership are exemplary today. “The China Pakistan Economic Corridor will change the fate of Balochistan,” he maintained.