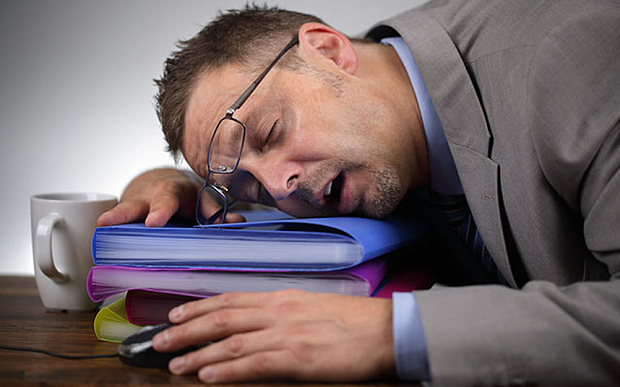 VANCOUVER - Obstructive sleep apnea, which wakes people many times a night when their airways become blocked, could also raise the risk of getting hurt during the day at work, a small Canadian study suggests. Of more than 1,200 sleep clinic patients, those with sleep apnea were twice as likely as others to suffer a workplace injury and three times more likely to have one that was related to failed vigilance - such as tripping, falling or getting burned - the researchers report in the journal Thorax. Patients with sleep apnea tend to get very fragmented sleep, noted senior study author Najib Ayas. “A lot of times people may not remember being woken up, it’s like someone going in there and shaking them awake many times per hour,” said Ayas, an associate professor of medicine at the University of British Colombia in Vancouver. “They wake up and they feel quite tired during the daytime and we think that that’s probably what accounts for the increased risk,” Ayas told Reuters Health by email. An estimated 22 million Americans suffer from sleep apnea and the vast majority of cases are undiagnosed, according to the American Sleep Apnea Association. With obstructive sleep apnea, a person’s airway collapses repeatedly during sleep, causing a brief period of not breathing, often followed by sudden gasping, coughing or snoring. This can occur hundreds of times per night and disrupts the brain’s normal sleep cycle, leading to daytime fatigue and other symptoms. To examine the link between sleep apnea and workplace injuries, the study team looked at a subset of patients of the British Colombia Hospital Sleep Laboratory between May of 2003 and July 2011. All 1,236 patients had come in to be screened for obstructive sleep apnea; 994 were diagnosed with the condition and 242 were not. The researchers analyzed data on workplace injuries for the entire group over the previous five years collected by WorkSafeBC, a worker’s compensation provider. The records showed that 111 patients experienced occupational injuries in the past five years, representing about 9 percent of the group. People with sleep apnea were twice as likely as those without the condition to have experienced workplace injuries: Just over 5 percent of people without sleep apnea got injured, while nearly 10 percent of those with sleep apnea suffered injuries at work. Patients with sleep apnea were nearly three times more likely to suffer an injury that was related to vigilance or attentiveness, including those caused by falls, exposure to heat or electricity, car crashes and slipping or tripping. When the researchers adjusted their results to take into account gender, body fat, alcohol use, age and type of work, the overall connection between apnea and injuries weakened somewhat. But patients with sleep apnea were still 76 percent more likely than those without the condition to experience workplace injuries. Patients with more severe sleep apnea were not more likely to get hurt than those with moderate or mild apnea, the study team notes. In this study, people with sleep apnea were being compared to people who were coming in with other sleep issues, noted Eva Lindberg, a professor at Uppsala University in Sweden who studies sleep breathing disorders. The injury risk associated with apnea might be even higher if sleep apnea patients were compared to people with no sleep issues at all, said Lindberg, who was not involved in the study. “It is of course important for all workers to be safe at work and avoid occupational injuries,” Lindberg said by email. “The risk is highest at workplaces where a high vigilance is needed.” It may be important for employers to screen workers for sleep apnea in workplaces with high injury risk, Lindberg added. In another recent study, long-haul truck drivers who adhered to employer-mandated use of sleep apnea treatment were five times less likely to have vehicle accidents than those who didn’t use the treatment (see Reuters Health story of March 21, 2016, here: reut.rs/1WLUuwQ). “If you have characteristic symptoms of sleep apnea you should probably talk to your doctor,” said Ayas, adding that the treatment of sleep apnea is very effective in reducing sleepiness. -Reuters