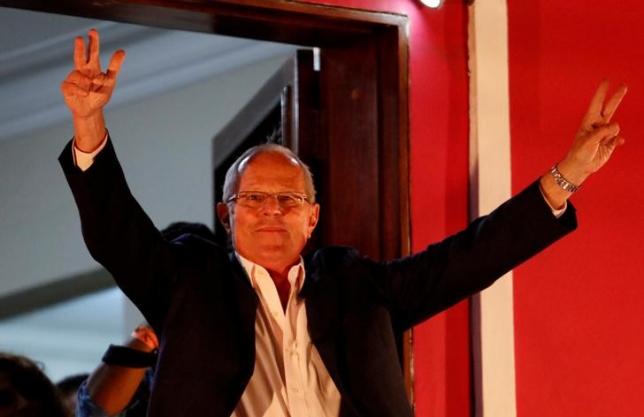 LIMA – Former Wall Street executive Pedro Pablo Kuczynski held a narrow lead in Peru's presidential election with partial results showing him less than 1 percentage point ahead of Keiko Fujimori, the daughter of an imprisoned former authoritarian leader. With 91 percent of all votes counted on Monday, Kuczynski - known in Peru by his initials PPK - had 50.32 percent support while Fujimori trailed on 49.68 percent. The gap had narrowed slightly from the previous count. Fujimori had long been the favorite to win the election, but Kuczynski caught up with her in the final days of the campaign as Peruvians weighed the authoritarian legacy of her father former president Alberto Fujimori and fresh scandals involving her close advisers. Final results in what appeared to be Peru's closest election in at least three decades were expected later on Monday. Mariano Cucho, the head of the electoral office ONPE, urged Peruvians to wait "with calm and prudence" for the final numbers, saying votes had not been counted from Peruvians living abroad. They account for 3.86 percent of the electorate. Ballots from some far-flung provinces had also not yet been counted, and about 1.5 percent of the expected total were being reviewed again due to lack of clarity. Peru's Select Stock Index .SPBLPGPT opened little changed, as the policies of both candidates were considered favorable to investors. The sol currency PEN=PEstrengthened 0.3 percent. A sample review of ballots by Ipsos polling company gave Kuczynski a 1 percentage point lead over Fujimori. GfK polling firm also gave him a slight advantage. Many Peruvians credit Alberto Fujimori with defeating violent Shining Path rebels and building schools and hospitals in rural areas when he was president in 1990-2000. But his authoritarian style divided the country and he is now serving a 25-year sentence for corruption and human rights abuses. Kuczynski, a 77-year-old former prime minister, investor and World Bank economist, portrayed himself as an honest and experienced leader who would clean up corruption, ensure every town in Peru has piped water and revive economic growth that has slowed on weaker prices for Peru's mineral exports. Despite endorsing Fujimori during her first presidential bid in 2011, Kuczynski swept up the support of her critics from across the political spectrum and stepped up attacks against her in the final days of campaigning. "We want a democratic country, a country committed to dialogue!" a jubilant Kuczynski said as he waved to supporters from a balcony at his campaign headquarters on Sunday evening before the partial count was announced. His party mascot - dressed as a guinea pig - danced with volunteers and his campaign song cranked out the chorus "PPK is rising, rising!" In an emotional speech on Sunday evening, Fujimori was also upbeat, saying the polls showed a technical tie and votes that were expected to come in slowly from Peru's most remote regions would favor her. "This is a tight vote without a doubt ... what we're seeing is the vitality of democracy in our country, and that fills me with pride," Fujimori said as she gave the crowd the thumbs-up. DIFFERENT STYLES While both candidates are fiscal conservatives who would maintain a free-market model in the resource-rich Andean economy, their styles and approaches differ widely. The campaign pitted the Fujimori family's brand of right-wing populism against Kuczynski's elite background and stiff technocratic style. "Peru will be much better off with PPK. I'm very proud that Peru remembered what happened years ago. I have family members who had to leave the country because of Fujimori," said Alexandra Gamarra, a 25-year-old university student. If he wins, Kuczynski will have to reckon with a solid majority of Fujimori's party in Congress and a leftist party that has promised not to align with either of them. Fujimori, 41, a former congresswoman, has spent years trying to broaden her appeal beyond loyalists to her controversial father in her bid to become Peru's first female president. Fujimori ousted her father's staunchest defenders from her party's congressional ticket at the start of her campaign, criticized his decision to shutter Congress in 1992 and stepped up campaigning in provinces she lost to leftist candidate Ollanta Humala five years ago. Still, many voters remained wary, especially after a senior aide stepped down amid allegations that linked him to money laundering and drug trafficking. Local journalists later accused her running mate of feeding them a doctored audio tape in a bid to discredit a source - a reminder of the days when her father's advisers bribed tabloids to sway public opinion. Fujimori has defended her team and said her party was the victim of a smear campaign. –Reuters