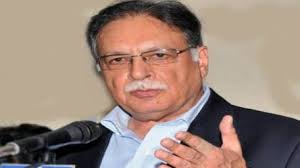 ISLAMABAD (92 News) – Federal Minister for Information and Broadcasting Pervaiz Rasheed has said that the Yemen issue should be resolved peacefully. Talking to the media on Friday, he said that the sanctity of Haramain Sharifain is resposnibility of every Pakistani. “We will fulfil our responsibility as a Muslim if someone caused any harm to the sanctity of Haramain Sharifain,” he said. The minister said that the prime minister has talked to Turkish leaders and the issue should be resolved through talks. He said: “We will first see that where Imran Khan has kept the rigging proofs.” Pervaiz Rasheed said that Imran Khan has made tall claims. “Let’s see what he will show to the judicial commission.” He said that representatives elected by 180 million people had presented the resolution on Yemen and they made the decision by heart, not under pressure.