SHARJAH (92 News) – Peshawar Zalmi defeated Multan Sultans by five wickets in in the 4th edition of Pakistan Super League (PSL) at the Sharjah Cricket Stadium. Fast bowler Hasan Ali’s exceptional four-for 17 bowling spell and opener Imamul Haq’s half-century scripted a thumping five-wicket win for the Peshawar Zalmi against Multan Sultans. Opener Imamul Haq continues to silence his critics with timely impactful performances, today was no exception as with his 52 off 44 runs innings with five boundaries and one six on 118.18 strike rate the Pakistani international player did half the job of the team. Multan Sultan set 146-run target for Peshawar Zalmi, while Zalmi lost early first wicket of Kamran Akmal. Pollard hits four sixes in a row to leave Multan Sultans in full control. Pollard put his fair share of 25 runs with 250.00 strike rate to ease the pressure off from Sammy-11. DT Christian, Junaid Khan took two wickets each while Irfan picked one for the Sultans. Earlier, Peshawar Zalmi won the toss and elected to field first against Multan Sultans. 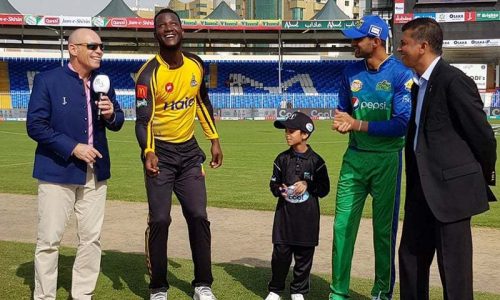 Hassan Ali, the leading wicket-taker of this season so far with his timely dismissals of James Vince, Shahid Afridi, Shoaib Malik and Hammad Azam, brought to an end the Sultans' batting powerhouse. Sultans’ managed to score only 145 runs, while Sameen Gul, Wahab Riaz, Umaid Asif and Liam Dawson picked one wicket each. Skipper Shoaib Malik and Shahid Afridi were not able to deliver a fiery knock as per the expectations as both played 22, 14 run-innings respectively. Shahid Afridi is back in the starting XI for the Sultans, while Johnson Charles is coming in for Laurie Evans. This is the final day of PSL 4 matches being played in Sharjah. The Sultans are second lowest on the points table having lost three and won one of their matches. Most recently Lahore Qalandars took a brilliant stand against Multan Sultans on Friday. With a 201-run target to chase, AB De Villiers led the charge with much-needed support provided by David Wiese who scored a six at the last ball at a time when it seemed the side would lose by two runs. Peshawar Zalmi stand in third place on the PSL 4 points table having won two and lost two of their matches. On Friday, Islamabad United had given Zalmi a target of 159 runs but Zalmi were unable to obtain the score despite an excellent effort by Kieron Pollard, who scored 51 off 22 balls, with three 4s and five 6s. Point Table: