Peshawar Zalmi win by one run, Quetta Gladiators knocked out 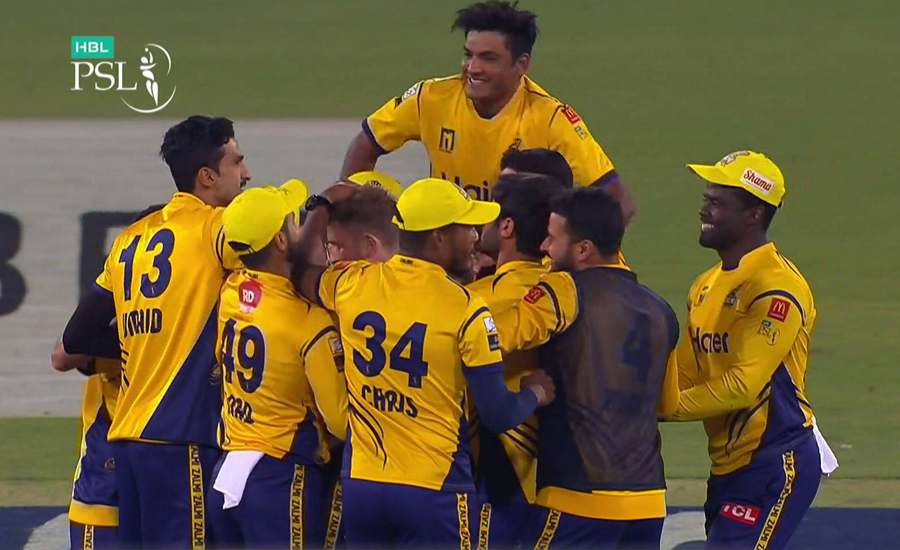 Peshawar Zalmi win by one run, Quetta Gladiators knocked out

LAHORE (92 News) – Peshawar Zalmi beat Quetta Gladiators by a run in the first elimination match of the Pakistan Super League at Gaddafi Stadium on Tuesday. Chasing the 158-run target, Quetta Gladiators could score 156 runs for the loss of nine wickets in the stipulated 20 overs. Mohammad Nawaz (35) and Sarfraz Ahmed (35) were the tops scorers. Anwar Ali’s 28 runs off 14 balls laced with three sixes and one four raised the hopes of achieving the target. Hassan Ali, Sameen Gul, Wahab Riaz and Umaid Asif took two wickets each. Earlier being invited to bat, Peshawar Zalmi scored 157 runs. LA Dawson smashed 62 off 35 balls with the help of six fours and 4 sixes. Tamim Iqbal (27), Mohammed Hafeez (25) and Wahab Riaz (15) were other main scorers. Rahat Ali grabbed four wickets, while Perera took two wickets. Mohammad Nawaz, Mir Hamza Hassan Khan and Mahmudullah shared one wicket each. Speaking in the post-match ceremony, Quetta Gladiators' skipper Sarfraz Ahmed said: "The match was in our hand, and I feel we lost the game because of our own errors. Nawaz and I should not have been out that time. If we were sensible off the last ball, we could have had the super over, but the pressure got the better of the boys at the end. The way the pitch was, it did not matter whether we batted first or second today. Our journey this year has been full of ups and downs, but Nadeem (our owner) has been excellent. We hope to come back stronger next year." Hassan Ali was declared Man of the Match. He said: "As long as we win, it's okay to win late. The last over was a lot of pressure because of Anwar's sixes. The way Sarfraz played, we felt the pressure back then too. I am fit now, both with the new ball and the old ball. Finally, a big thank you to the Lahore crowd." On Wednesday, defending champions Peshawar Zalmi will face Karachi Kings today.