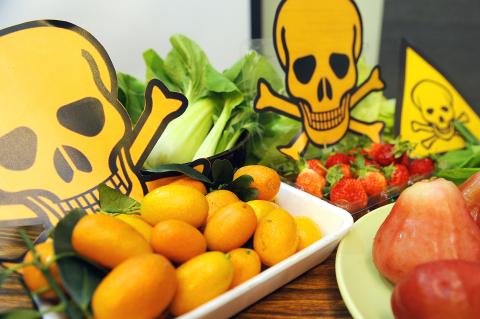 CHICAGO - Men who eat more fruits and vegetables with pesticide residue have lower sperm counts and a lower percentage of normal sperm, according to a new study. The researchers studied sperm samples from 155 men who were attending a fertility clinic between 2007 and 2012 because they and their partners were having trouble conceiving. The men also answered 131 questions about the food they ate, including how often and in what quantities they ate 38 fruits and vegetables like apples, avocadoes or cantaloupe. The researchers compared their answers to annual US Department of Agriculture data on average pesticide residue in types of produce. For example, peppers, spinach, strawberries, apples, and pears tend to have high levels of pesticide residue, whereas peas, beans, grapefruit, and onions have low-to-moderate amounts. Half the men ate at least 3.5 servings of fruits and vegetables per day. The total amount of fruits and veggies in the diet was not associated with semen quality. But men who ate at least 1.5 servings of high-pesticide produce per day had about half as many sperm in their semen, and two-thirds as many normal-appearing sperm, as men who ate less than half a serving of high-pesticide produce per day, according to results in Human Reproduction. “This does not necessarily imply reduced fertility,” said senior author Jorge Chavarro of Harvard T.H. Chan School of Public Health. “We will continue our work to try to figure out to what extent these effects in semen quality may ultimately impact fertility.” Pesticide-laden produce was linked to poorer semen quality even when the authors accounted for smoking status and the men’s weight in relation to their height, which can both affect sperm quality. In fact, men who ate more high-pesticide fruits and vegetables tended to exercise more and have a healthier diet overall, Chavarro said. Other studies had tied poorer semen quality to occupational and environmental exposure to pesticide chemicals, and the latest results indicate the same is true for pesticides in the diet. Given that pesticides are designed to kill and harm pest reproduction, it is not surprising that they are harmful to human reproduction, said Dr. Hagai Levine of the Icahn School of Medicine at Mount Sinai in New York, who coauthored an editorial published with the findings. Recent evidence indicates that sperm quality is an important measure of general health, and poor semen quality predicts higher risk of death, Levine told Reuters Health by email. “This is an observational study, not an interventional study, so other characteristics, associated both with pesticide-riddled fruit consumption and with semen quality could explain the results,” he said. But the researchers did account for other factors like age, body mass, physical activity, race, smoking, urogenital conditions, season and year, he noted. “These results do not point to any one specific pesticide or group of pesticides,” Chavarro told Reuters Health by email. “Instead, they suggest that pesticide mixtures, as used in agriculture, may be to blame.” “Gaining a better understanding on which specific mixtures or pesticides explain this relation will be key moving forward, however,” he said. He and his team are actively investigating whether women’s markers of fertility may also be linked to pesticides in the diet, he said. Organic produce carries less pesticide residue, if you can afford it, he said. Another option is to choose fruits and vegetables known to have low levels of pesticide residues, he said. Some pesticides remain on the surface of produce and may come off when washed, but many others are absorbed into fruit and washing will do nothing in those cases, Chavarro said. - Reuters