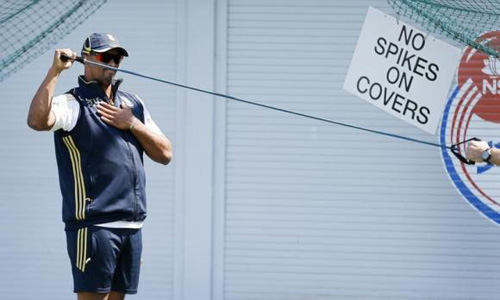 SYDNEY (Reuters) - Vernon Philander's hamstring injury will not only upset the balance of South Africa's attack against West Indies but also test their pace bowling depth when the two sides clash in their World Cup Pool B match in Sydney on Friday. The 29-year-old Philander limped out of South Africa's 130-run humbling by India at the Melbourne Cricket Ground on Sunday and was ruled out by the team's medical staff on Monday for at least 10 days. Philander's injury disrupted South Africa's attack against India, with the defending champions scoring over 300 and smashing Wayne Parnell for more than 80 runs from his nine overs of seam bowling. AB de Villiers side will now need to decide how best to make up their attack with backup paceman Kyle Abbott having played only 11 ODI matches and none at the World Cup. If Abbott is picked then all-rounder Farhaan Behardien could possibly replace Parnell and share the 10 overs needed to be bowled with JP Duminy. It is the second time in the last six months Philander has missed one-day internationals due to a hamstring injury. Philander's partnership with Dale Steyn and Morne Morkel has earned the trio the label as the most-balanced and penetrating attack in world cricket. The express pace of Steyn is complimented by the steepling bounce off a length from Morkel, while Philander is 'Mr Consistent', delivering an outswinging line and length that restricts batsmen scoring and puts them under pressure. Results in the longer form of the game speak for themselves. In the 28 test matches the trio have all played together, South Africa have won 17, lost four and drawn seven. In the limited overs arena, however, their impact is not as influential has many would expect. The trio have played just 16 one-day internationals together, with Philander, an automatic choice in the test side having really only cemented himself in the limited overs team in the last 18 months, despite making his debut in 2007. While Philander's absence has placed the focus on their pace trio at the World Cup, it is actually South Africa's vaunted batting lineup that propelled them into tournament favouritism with Australia. In the past 13 months, South Africa have won 17 of their 25 completed games, scoring more than 300 on seven occasions -- matches they all won. In 11 of those victories, they have batted first. Of their eight losses, five came when they are asked to chase the total, something West Indies captain Jason Holder may take into consideration if he wins the toss at the Sydney Cricket Ground.