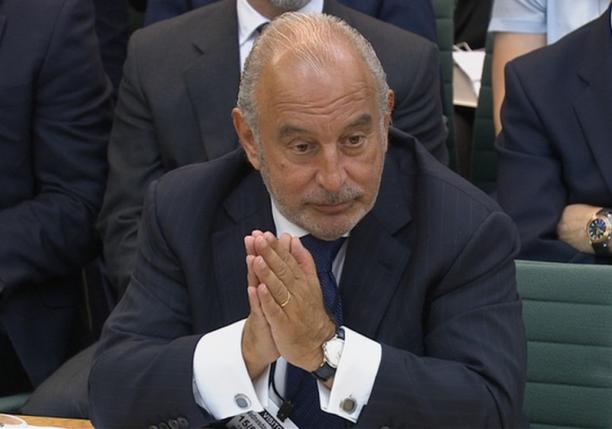 LONDON - Retail tycoon Philip Green's greed and disregard for corporate governance led to the demise of BHS and the loss of 11,000 jobs, a joint parliamentary committee said, calling the collapse of the British stores group "the unacceptable face of capitalism." Billionaire Green owned BHS for 15 years before he sold the loss-making chain of 180 stores to Dominic Chappell, a serial bankrupt with no retail experience, for one pound last year. It went into administration in April, and all remaining 114 stores are due to close in the next four weeks. The business was sold with a 571-million-pound hole in its pension fund, which if not rectified will leave 20,000 pensioners facing significant reductions to their income. "(Green's) rush to drive through the sale of BHS - a chain that had become a financial millstone and threatened his reputation - was the culmination of a sorry litany of failures of corporate governance and greed," said the Work and Pensions and Business Committees in a statement on Monday. The lawmakers said Green, Chappell, company directors and assorted advisers all got richer or rich from the part they played in the failure of BHS, with the only losers being the ordinary employees and pensioners. "One person, and one person alone, is ultimately responsible for the collapse of BHS," Work and Pensions Committee chair Frank Field said in the statement. "His reputation as the king of retail lies in the ruins of BHS. His family took out of BHS and Arcadia a fortune beyond the dreams of avarice, he's still to make good his boast of 'fixing' the pension fund." Green said when he appeared before the committees last month that he would "fix" the hole in the pension scheme. He also admitted it was a mistake to sell BHS to Chappell. A spokesman said Green had no immediate response to Monday's report. The joint committee did not spare "twice-bankrupt chancer" Chappell. They said he had his hands in the till, taking 2.6 million pounds from the business in addition to an outstanding 1.5 million pounds family loan. Chappell told the committees in June that he was part of the downfall of the group, but said his turnaround plan was thwarted by the pension deficit and Green's failure to make good on a promise to provide trade credit insurance to suppliers. INCREDIBLE WEALTH The report reserved the fiercest criticism for Green. The lawmakers said Green, whose Arcadia group owns a string of fashion chains including Topshop, systematically extracted hundreds of millions of pounds after he bought BHS for 200 million pounds in 2000, leaving the 88-year old company and its pension fund weakened to the point of collapse. Green's family, led by his Monaco-based wife Tina, accrued "incredible wealth" during the early, profitable years of owning BHS, the lawmakers said. Significantly more money left the company than was invested in it under his ownership, the report said. The 64-year-old then rushed to sell the chain to Chappell, riding roughshod over regulatory concerns about the suitability of the new owner. The committees said the demise of BHS -- the biggest collapse in the British retail industry since Woolworths in 2008 -- begged wider questions about holes in company law and pensions regulation, which it would later turn to. For Green, however, the report will increase pressure to revoke his knighthood, awarded in 2006 for services to retail. The government said on Saturday the honour was under review. -Reuters